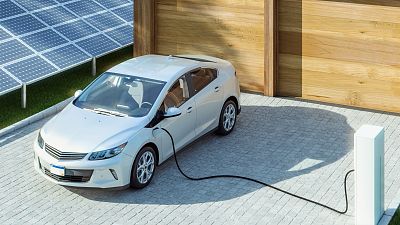 Electric conversion kits may be an essential purchase for car-owners soon in Europe.

One Dutch-Irish company is leading the way towards greener roads, by selling cheap electric conversion kits for existing petrol or diesel cars.

Drivers will be able to cut their carbon footprints by trading in an old car running on fossil fuel and turning it into a functioning, battery-operated electric vehicle.

Based just south of Dublin, New Electric claims to be able to “future proof” cars for years to come, no matter the brand, the desired speed, or torque. Its mission is to take good quality cars that may have been sent to the scrap heap and revamp them by installing batteries.

But how exactly do you convert a car from manual to electric and how much does it cost?

EV conversion can be pricey if you’re converting a classic car or purpose vehicle, but it’s largely dependent on the weight. An 100km range is achievable for any conversion, but a bigger range can be reached with more batteries and when there is sufficient space in the car.

Just a few #opensource cars being converted to electric drive by our 2019/20 course participants ?

2021 course dates have been announced ??https://t.co/EvkpCkhDxZ#ElectricVehicles#electriccars#Ireland#ClimateCrisis#ClimateActionpic.twitter.com/VBiBUA8Mxm

According to industry specialist Autocar, you can convert your car for no more than £900 (€993) in some cases.

“We recently bought a Lexus GS450 hybrid. It cost us £500. It's absolutely immaculate. It was basically being written off because it had a battery problem. But you can remove the internal combustion engine,” New Electric’s Kevin Sharpe told Autocar in an interview.

“It comes from marine technology, originally. It’s quite a normal thing to do in a marine environment, people upgrade boats all the time. It’s not unusual to see a hull that’s 100 years old with a new engine, and we wanted to start doing the same thing to cars.”

What about classic cars?

For fans of vintage Rolls Royces and Bentleys, there are now also specialists working to retrofit classic cars with electric engines.

British company Lunaz works to restore vintage vehicles with modern electric parts, with some cars managing 400km on a single battery charge. The team works from the world-renowned Silverstone race track, rebuilding cars from the “ground up”.

Co-founders David Lorenz and John Hilton aim to preserve the feel of a classic car, while giving owners the climate-friendly elements of electric vehicles.

"These are some of the most beautiful cars in history, and it gives you the chance to be able to use them with a guilt-free pleasure and conscience," says Lorenz.

The need for electric vehicles

To limit the global temperature rise to 1.5ºC, car emissions must be zero by 2050 at the latest. That means we must be selling only electric cars by the early 2030s, according to European board Transport & Environment.

Road transport is Europe's largest source of CO2 emissions, accounting for 20 per cent of all emissions.

These are all crucial pillars of e-mobility and should be ‘accelerated’ in the coming years.