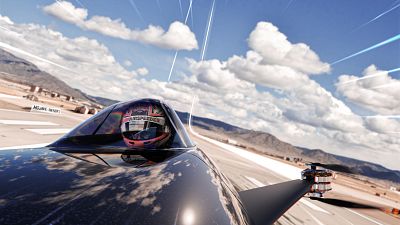 Flying car races are no longer just reserved for computer games and science fiction movies, now they are hitting the real world.

The organisers behind the world’s first motorsport series for flying electric cars, Airspeeder, say the races are expected to take place in 2020, with a view to scheduling a full Grand Prix championship season soon after. Meanwhile, they have "bold ambitions to accelerate a revolution in sustainable transport," the founder of the race, Matt Pearson told Euronews Living.

Once restrictions related to the coronavirus crisis are lifted, the Speeders (flying electric cars) will be further tested - they have already undergone successful unmanned tests using a remote control. A team of test pilots recruited from the US Air Force and Martin Aviation are in charge of the MK3 prototype, which is set to be trialled in the Mojave Desert, California. The Speeders can gain up to 200 kph at full speed and fly between 5-40 metres off the ground.

The company responsible, Alauda, is based in Adelaide, South Australia, and plans to house a growing team of technical specialists drawn from leading names in the aerospace, motorsport and engineering spheres. Rolls-Royce and Babcock Aviation are both on the list, keen to get involved. Their vision is to provide multiple teams and manufacturers with the hardware they need to create the flying cars, and the freedom to set strategy and draft in pilots.

Is this really going to be the Formula 1 for flying cars?

"Traditional motorsport fans will certainly recognise many elements of our race series," says Matt Pearson, founder of Alauda and the Airspeeder series.

Pearson continues, the plan is to have "distinct teams, pit-stops, pilots and a focus on delivering the sport to as many fans as possible through globally broadcasted live streams."

"However, we do differ in the sense that Alauda, the manufacturing arm of our company, will develop the technology and set the regulations. This means that there will be [a] significant focus on the skill of the pilot and exceptional race strategy." Pearson believes motorsport fans will be "very inspired" by this approach.

In every sense, "this is motorsport for the 21st century," he says, adding "it will inspire people who are native to E-Sports as well as the more traditional motorsport fan."

We sat down with founder Matt Pearson to find out more

What are the most important aspects of green technology you focus on?

"Electrification may answer many of the questions internal combustion cannot. By racing these flying cars we are moving towards an 'electric vehicle future', much in the same way Formula E has inspired increasing uptake for electric cars."

"We have built sustainability into our approach to racing. For example, our approach to globally stream the sport rather than focus it on being a mass spectator spectacle ensures there is minimal environmental impact in the creation of infrastructure. Our courses do not require building or maintaining in the same way a modern motorsport track does. Also, we don’t require impactful materials like tarmac to stage our races."

"This really is a motorsport that answers the demands of a more conscious generation."

As you are engaged in open dialogue with the wider passenger flying car industry (eVTOL) to address key issues of safety, regulation and awareness, how do you see the future of the sector in light of a global recession?

"In economic terms, the eVTOL (Electrical Vertical Take Off and Landing) sector has the potential to be worth €1.37 trillion (($ 1.5 trillion) by 2040. It is backed by some of the biggest names in aviation, technology and automotive. These companies develop technology that spans both growth and recessionary economic cycles. We remain focused on our role to accelerate the development of these technologies."

In the future, how do you plan to develop sustainable urban transport?

"What we are doing is very much accelerating the development of those technologies. If you look back to F1 as a driver of technological development, every modern car has technologies that were developed as a consequence of motorsport. We play that role for the eVTOL industry."

"We can be a very potent driver of key questions, including performance, safety and awareness. Ultimately, what we are doing by racing is hastening a mobility revolution that will liberate cities with clean air technology that will relieve congestion and bring communities closer together."

Lastly, how will flying car racing have an impact on communities?

"What we can say is that, as individuals, we are very conscious of the impact of our actions in both an environmental and cultural sense. On the latter, we are very invested in promoting women in motorsport as we feel they are strongly underrepresented both as drivers and engineers."

"We are in the early stages of developing a programme that trains and develops young women through our sport as future engineering leaders and look forward to seeing them added to the ranks of very talented female engineers that are already with us."

Click on the video above to see how the prototypes are flying.