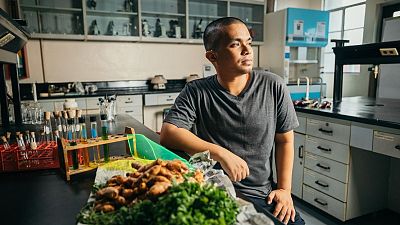 A student in the Philippines has come up with a breakthrough development using wasted crops to convert UV light into renewable energy.

He is the winner of the first ever sustainability prize at the 2020 James Dyson Awards.

The British awards are known for their support of young engineers. Each year, the panel select entries on the basis of whether they meet their main requirement, to solve a problem with an innovative solution.

Carvey Ehren Maigue, from Mapua University in Manila, has solved two with his invention entitled AuREUS. It has the potential to create more renewable energy than traditional solar panels and can function fully even when not in direct sunlight.

The material harvests UV light and converts it into visible light which is then turned into electricity. One of the components comes from leftover vegetables. Making use of wasted crops in this way is a great help to struggling farmers, "especially during typhoons", explains Carvey.

The impacts of extreme weather events like typhoons are of great concern to the young engineer.

He describes the connection he had with the land growing up and recalls the long mornings he used to spend with his grandmother out in the garden. One day, Carvey hopes to share a similar moment with his own grandchildren.

"Due to what's happening with our climate, at 9 a.m. here in the Philippines is already very hot, and there's nothing more you can do outdoors," he tells Euronews Living.

Carvey's main interest lies in renewable energy. He spent two years developing his idea into a real project and kept working on it even after having failed to make the national stage of the James Dyson Award in 2018.

Having just won the foundation's Sustainability Award, he says that his aim is to provide the solution to as many people as possible and inspire fellow students in the Philippines.

"We may not be that blessed or developed compared to others, but we should not be looking at that as a hindrance. I hope to show that it's possible that they just need to pursue and continue their hard work because eventually, there's a global stage that's waiting for us," he concludes.

Click on the video above to learn more about the invention.