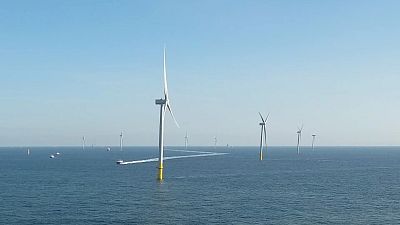 In this episode of Ocean, Euronews meets those working at some of the major new industrial sites to find out more.

Ørsted's "Borssele 1 & 2" wind farm is one of them, based in the North Sea, 22 kilometres off the Dutch coast.

It is home to ninety-four wind turbines, which are being attached to the seabed at depths ranging from 14 to 40 meters. When it is complete, it will be the largest offshore wind farm in the Netherlands.

The wind farm will deliver electricity to one million Dutch households.

It will also help decarbonise the coastal industry by powering a new electrolyser plant that will produce renewable hydrogen for carbon-neutral fertilisers.

Steven Engels is the general manager at Ørsted and talked to us about how far along things are.

"There are very advanced plans for hydrogen production. Everything is ready now it's just a matter of launching it," he said.

The wind farm is a sign of change - that was anticipated in the EU's "Offshore Renewable Energy" strategy- that maps out a path to replacing imported fossil fuels, creating industrial opportunities and green jobs across the continent.

It is expected that in 30 years, more than a quarter of Europe's electricity will be produced at sea, up from only 2% today.

Like many things in the offshore wind sector, investments are enormous. Apollo is one of the newly built installation vessels moving turbine components between ports and offshore wind farms.

Teams at the port of Oostende in Belgium work day and night, seven days a week, to finalise another large wind farm 45 km off the coast, called SeaMade. However, loading 81 meter long blades onto the vessel is not an easy task, especially when it's windy, as Georg Horvath, senior site manager at Siemens Gamesa, told us.

"Right now you can see one of our B81 blades being brought forward to the quayside for loadout. We bring the blades one by one forward, loading onto the Apollo. The whole area here we are using to pre-assemble the larger components."

Some new ports are built specifically for the offshore wind sector use, but others, like the port of Oostende, as pictured above, have to be modernised.

"For most satellite harbours, that are not purpose-built, we need to invest some kind of money and time to make it fit for our operations, and some of the improvements will always be permanent here. For example, the RO-RO ramp, where we are transporting our equipment by the roll-on-roll-off vessel, had to be modified to withstand the heavy loads of our components," Georg added.

The whole logistics chain is being improved to handle components that are manufactured in various countries across Europe and are becoming increasingly large in size, as Jan Claes, another senior project manager at Siemens Gamesa, explained.

"The A380 aeroplane, the biggest passenger aeroplane in the world, can fly between our wings. The surface that they cover is approximately three big UEFA championship football fields. Turbines are getting bigger and bigger to respond to the increasing demand of green energy. It means more people getting employed, factories being built, assembly sites being set up like this one," he said.

The technological development is led by industrial giants. However, it has also prompted small innovative startups to come up with new ways of using offshore renewables, like a prototype produced by Blue Power Synergy that combines solar panels with vertical wind rotors.

The development of a 12 meter long self-supporting energy pontoon equipped with wind and solar production, including energy storage, was supported with EU funding - and can be deployed at sea for example, to provide power for water desalination in developing countries and small islands.

Yvon Timmerman is the project manager and co-founder of it.

Experts say optimising planning will help improve the economy of offshore renewables. The future Kriegers Flak wind farm is located at sea between Denmark and Germany. It connects to the power grids of both countries simultaneously, so it can supply electricity according to the highest demand and price.

"The advantage of having a factory in Cherbourg is the port location - the blades can be loaded on the vessel and delivered to the nearby offshore farms. We have about 400 people working here, and our production target within a year is 4 blades per month," he said.

Responding to growing demand, the factory recently hired hundreds of new workers. They come from all backgrounds and are trained on site.

"It is necessary to train more, because we are understaffed here in the production department. It's a 107 meters long blade, we need a lot of people around it to be able to do our job. There are lots of hiring positions in the wind power sector- production operators, quality assurance, we have jobs in logistics, in maintenance," Ariane Merat, an instructor at LM Wind Power explained.

With its 12 megawatt turbine recently certified for commercial use, the company has plenty of blades to make.

"This is a growing sector. The launch of the Cherbourg site in the Normandy region has led to the creation of more than 550 direct jobs at the plant and 2,000 indirect jobs, at the local level," Florence Martinez-Flores, Director of Human Resources, LM Wind Power, told us.

The massive expansion of the offshore wind sector comes with a price tag to match: the European Commission estimates that €800 billion of investment will be needed between now and 2050 - mostly from private companies.

A breath of fresh air for post-COVID economic recovery, and for Europe's transition towards clean and sustainable energy.