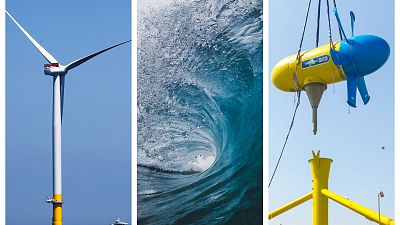 In a world increasingly affected by climate change, burning fossil fuels is no longer a long-term option.

Thankfully, the natural world around us offers plenty of opportunities for clean, renewable energy. The ocean is one of them.

Today there are three main sources of offshore renewables. This is how they work.

Today, wind farms are the most popular type of offshore renewable and compared to wind farms on land, they have many advantages:

When the wind blows, the turbine blades spin. The blades are connected to a series of mechanisms that increase the spin speed. This energy is then transmitted to a generator.

"It's like if you think of a fan but the opposite", adds Ramirez.

The generator transforms that kinetic energy into electricity. The power is then sent to a substation, a point where the electricity produced in the wind farm is collected. After that, a transformer will change the voltage to a higher level and the energy will be sent to houses onshore.

Offshore wind energy is helping to mitigate climate change. But one of the biggest challenges is that the infrastructure remains expensive to build and maintain. Wind farms can face harsh weather conditions, such as storms and hurricanes.

Currently, European engineers are working on solutions and the industry is already reducing costs.

"The technology has evolved", says Christoph Zipf, press and communications manager from WindEurope. "Turbines got bigger, but also because of scale effects. The more we learn, the cheaper they get".

Zipf also highlights that today, offshore wind is one of the cheapest sources of electricity in Europe: it's cheaper than all fossil fuels.

What about the ocean itself? Waves contain a lot of energy and many companies around the world are exploring how to exploit it.

AW-Energy Oy is one of them. This company has created the WaveRoller, a device that converts ocean wave energy into electricity hundreds of metres away from the coast and at the bottom of the sea.

"The big panel moves back and forth with the ocean waves and captures the energy," explains AW-Energy Oy's chief technology officer Jussi Åkerberg. "The power take-off unit with generators levels the energy and converts it to electricity."

The bigger the wave, the more powerful it is. But the power generated also depends on its speed, its length, and the power of the wind pushing it.

"In the future, multiple WaveRoller units can be combined to create a bigger wave farm", he adds.

But despite its many advantages, this technology isn’t widely used yet. Researchers are still investigating how to make it an affordable and reliable alternative.

Tidal energy is one of the largest untapped renewables. And it has plenty of benefits.

Tides are highly dependent on the gravitational forces of the moon, which are determined by its cycles. That means they are easier to predict than wind and sun and that it’s possible to know in advance how much electricity will be produced. Unlike other offshore renewables, they don't rely on the weather either, they work even when there is no wind or sun.

Tidal energy is generated with tidal power generators—underwater turbines—that are installed in places with high tidal movements. The movement of the water makes the blades turn. This drives the generator to produce electricity that is then sent to shore via power cables.

These devices can be difficult to install and maintain in the ocean due to harsh conditions, especially at competitive costs. However, recent technological improvements are making this possible. And many European countries are already embracing this technology, such as France and the United Kingdom.

What is the future of offshore renewable energy?

Today, only 2% of Europe's electricity is produced at sea. Nevertheless, the continent is the global leader in offshore renewables.

That is why the European Commission has launched an ambitious strategy.

By 2030, Europe's offshore wind capacity is set to multiply by 5, going from 12 to 60 GW. And by 2050 it will reach 300 GW, that's 25 times more than today. The EU has also committed to increasing ocean energy and other emerging technologies.

To meet these objectives nearly €800 billion will be needed. Most of that will need to come from private investment.

Marine litter - and the innovative methods to combat it