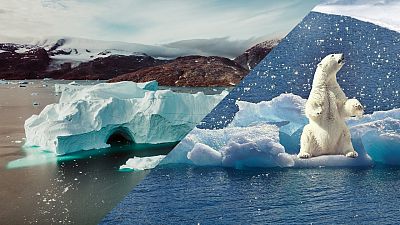 The ice caps are melting and sea levels are rising because of the warming of our planet due to greenhouse gas emissions from human activity. Those are the basic facts. However, if we dive into the detail, the picture is more complex, more uncertain, and full of vertigo-inducing figures.

You can rewatch the debate in the video player above.

"We have seen about 20 centimeters sea level rise in the last century," said Anders Levermann, Professor of Dynamics of the Climate System at the world-renowned Potsdam Institute for Climate Impact Research.

In 2019, Greenland lost a record 532 billion tonnes of ice during an extra warm year, a study released in Nature Communications Earth & Environment showed.

Meanwhile, in October this year, we saw the lowest average sea ice extent for the month since satellite measurements began in 1979, according to the Copernicus Climate Change Service.

It also said the global mean sea level has increased by 3.3 millimetres per year on average since 1993.

Levermann explained that there is a big difference between the Arctic and Antarctic as the former is an ocean surrounded by land while the Antarctic is an island surrounded by ocean.

While about 70% of sea level rise is caused by land ice melting, another reason for the ice caps melting is due to the warming seas.

"It's been a very warm year in the arctic and it's been persistently warm for months and months and that warms up the sea," said Dr Ruth Mottram, a climate scientist at the Danish Meteorological Institute.

"Year after year we've seen very low sea ice levels in the Arctic and that means when sea ice does form it tends to be quite thin and then it can't survive the melt season, so it gets harder to re-freeze again the following year."

She said the impact can have a knock-on effect downstream.

"There's quite a lot of evidence that this affects the climate in the mid-latitudes where we live and it's a sign there are very big changes happening in the planet and so it's a very clear marker of the climate change that's ongoing at the moment."

The Antarctic and Greenland ice sheets melting could add up to 40 centimetres to global oceans by 2100, according to stark forecasts by the Intergovernmental Panel for Climate Change (IPCC).

The impact would be devastating not just to the ecology of the Arctic but it would also be felt globally. It could increase destructive storms and expose coastal communities to repeated severe flooding.

"We have definitely seen sea levels rise, which affects the money we are putting into sea defences around the world," said Professor David Vaughan, Director of Science at British Antarctic Survey.

He said in cities such as London, Rotterdam, St. Petersbourg and Shanghai, cities are putting in defences that cost billions of euros.

But he said the picture is very different in less wealthy parts of the planet.

"In poor parts of the world, where people don't have the opportunity to build big defences, they are moving inland."

While Vaughan said he is "not expecting a wave that will kill us off", he believes it will marginalise and have a huge impact on communities.

"No matter how hard we're trying to exterminate our own species, actually we won't manage it," he said.

But he has not lost hope.

" I actually take heart from the fact that so many nations have responded so well to the COVID pandemic and that people really do understand the need to take action.

"And I hope we can translate some of that energy and positive energy into a response to climate change. Changing the way we interact with our planet and how we consume our planet's resources in the future."

Scientists have accidentally discovered a new island in the Arctic