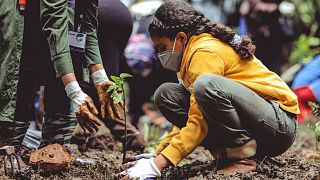 Trees are widely regarded as the saviours of our planet. They absorb carbon from the air, removing CO2 from our atmosphere, and use it as food to grow.

As climate change worsens, it’s no wonder so many tree planting initiatives are cropping up all over the world. This year, the European Union pledged to plant 3 billion trees as part of a Green Deal and the Paris Climate Agreement aims to restore more than 344 million hectares of forests.

But just how effective is tree planting? Last year critics raised concerns that the science behind it could be dangerously misleading.

New research from a coalition of academic and environmental organisations around the world has found that we could be better off letting forests grow back by themselves. The study is the most extensive effort so far to map and assess the carbon capturing potential of natural forest regrowth.

Natural regeneration could capture carbon from the atmosphere more quickly and for longer than replanting efforts. The study shows that there are nearly 70 billion hectares of land identified which could be set aside for trees to grow on. The land must not be being used for food production, not built on and not already a valuable carbon-capturing ecosystem.

Susan Cook-Patton, one of the study’s 17 co-authors, estimates that reforesting this land could capture more than 66 billion tonnes of carbon by 2050, the equivalent of one-quarter of all fossil fuel emissions every year. That makes it potentially the “single largest natural climate solution” we have available to us.

Cheaper and better for biodiversity

We shouldn’t dismiss tree planting as unimportant, especially in places where soil quality is not good and trees will not grow, but it shouldn’t be the first and only option. Some tree planting efforts can reduce the number of species in an area. So leaving nature to creep back in on its own could encourage local species to enter in, those that are more suited to the area.

The approach is also cheaper. A study published in 2020 found that helping trees to come back naturally to Brazil’s Atlantic Forest could save up to €75 billion.

“If new forests are going to be part of the many solutions needed to address climate change, planting tree by tree will take more time and money than we have,” Cook-Patton writes for the World Economic Forum.

“Of course, there will always be places that need planting [...] but we should always ask first if nature can grow the trees without us or with just a little bit of help.”