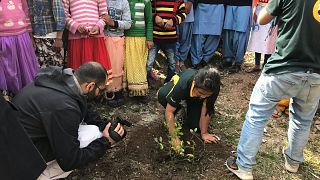 But rather than receive well wishes on social media, she posted a call out asking her 93k strong following to plant one tree each - in honour of her birthday.

Thousands of people responded and so far over 240,000 trees have been planted in India and across the world. Children in Lucknow, Mumbai and communities in the state where Licypriya was born, Manipur were the first to take part.

Indian environmental organisation, the Sustainable Green Initiative Foundation, added to the total by planting 200,000 fruit trees in her name.

“We chose to plant fruit trees because fruit trees can change lives, especially poor farmers, by supporting their livelihoods with additional income by selling those fruits after they grow up,” explains 12 year old climate activist Aarav Seth from Uttar Pradesh where the trees were planted.

He adds that initiatives like this are also fighting poverty and hunger as well as helping the environment.

Young people in the United Arab Emirates joined in too, planting 15,000 trees for the young climate activist’s birthday under an initiative called “Plant a Legacy”.

“I especially thanks to all the children, their parents and people of age groups and all the schools, local clubs and organizations who came out to plant trees on my birthday to bring a change in this world,” says Licypriya.

“Such efforts give a great message to our society by creating environmental consciousness and the feelings of living together with nature without harming them.”

Initially, the plan was to plant a few trees for her birthday, but now Licypriya is hoping to inspire the planting of one million trees before the end of 2020.

“We will continue to plant trees by targeting a minimum one million trees by 31st December 2020. Many people told me that I am too young to get involved in such activism but I prove to them that age doesn't matter to make a difference,” she says.

Many people told me that I am too young to get involved in such activism but I prove to them that age doesn't matter to make a difference.

What started out as a tweet has turned into a whole new movement called “Monday for Mother Nature” where school children in India and across the world are encouraged to leave a legacy by taking part in tree planting.

“We should take protest on the street as a last option when our leaders don’t listen to our voice but at the same time, we also should take climate actions by either planting trees or stop using single used plastics at our home,” added the 9-year-old.

“It’s not the time to wait only for our leaders to take climate action.“