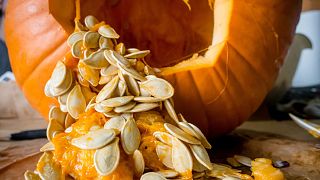 It’s that time of the year again, ghoulish costumes, socially distanced trick-or-treating and not so scary Starbucks pumpkin spiced lattes...

But what is perhaps the most frightening aspect of the holiday, is the amount of food waste accumulated as a result of pumpkin carving.

Yes, it sounds dramatic but the figures really are shocking. 8 million pumpkins were sentenced to landfill in 2019, which is “the equivalent of enough pumpkin pie to feed the entire nation.”

According to an survey by environmental charity Hubbub, 40 per cent of consumers purchase pumpkins to carve for Halloween, and 60 per cent of that number admit they dispose of the inner flesh. Meanwhile, 80 per cent say they don’t consider pumpkins’ primary purpose as a food item.

How can we rescue the pumpkins this Halloween?

Hubbub has organised its 'Eat your pumpkin' campaign to raise awareness awareness of the sheer volume of edible waste that ends up in the bin.

Suggesting ways to put a stop to the festivity’s wasteful excesses, it recommends pumpkin recipes to help you use up all the different bits. From a traditional pumpkin soup and roasted seeds for snacks, to a more adventurous coconut pumpkin cake, there's lots to choose from.

The absurdity of carving a fruit (yes, pumpkin is a fruit) into a holiday accessory and ignoring the edible innards has struck a chord with celebrity chefs and food waste activists like Mark Hix, Tom Hunt and Hugh Fearnley-Whittingstall.

These chefs, alongside wholesome fast food joint Leon have devised a menu of recipes created to whet your appetite.

Also hoping to alleviate the colossal pile of holiday waste is Toast Ale, a social enterprise known for launching a beer made from bread waste in 2016. Pioneering the UK’s first pumpkin brew, Toast Ale will be creating a Belgian-style beer harvested from local farms by volunteers, ready in time to stock your fridge in November.

Meanwhile Oddbox takes the “wonky”,“weird” and “kind of ugly” fruit and veg that doesn’t fulfil the standard appearance criteria of supermarket produce. It estimates 7.2 per cent of harvested food ends up as animal feed or in landfill due to imperfections.

Though there is little data on pumpkins alone, due to the fluctuating demand, one can only predict there’s even more pumpkins than other fruit and veggies to be rescued from an early grave. Last year, they prevented a staggering 7,000 pumpkins from going to waste.

Beauty solutions to the pumpkin crisis

Pumpkins are known for having a whole wealth of health benefits,both internally and externally. They have been claimed to help weight loss, bone and eye health, blood pressure, have antioxidant properties and even aid fertility!

The orange fruit can also do wonders for your skin. It contains enzymes which promote cell turnover and brightens and boosts collagen too for baby soft skin. Whilst fatty acids form a barrier on the skin and increase hydration, pumpkin's zinc properties are great for acne and reducing excessive oil production.

Here’s our quick and easy facial that could take years off you:

Blend all three ingredients together and, with a make-up brush, paint an even layer onto the skin. Rinse after ten minutes.

Honey is both both moisturising and has anti-inflammatory properties, helping blemish zones heal and repair. Tumeric, on the other hand, helps with brightening the skin.

Surprisingly pumpkin is actually great for hair. Not only does it promote hair growth, but it’s an amazing conditioner for dried out locks. Whilst vitamin C strengthens hair follicles, vitamin E enhances blood circulation in the scalp.

Pumpkin can also help you beat the grease. Zinc in the pumpkin pulp controls levels of sebum, whilst vitamins increase moisture and maintain and heal the scalp.

Here’s our organic hair mask to strengthen and replenish your tresses:

Blend it all up and apply to hair in sections to reap the benefits. Leave on for 20 mins and rinse.

Eat whilst you treat - we advise you try out Hubbub’s haunted graveyard tagine alongside your beauty makeover, just make sure you don’t mix them up.

And do remember that any food waste you do have left over should be recycled.