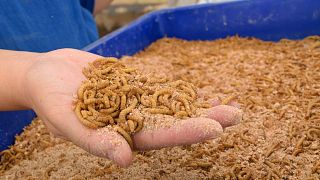 About an hour north of Paris, the world’s largest insect farm is being constructed. The new farm could help to provide a low-carbon source of alternative protein.

While some are looking for ways to introduce them directly into our diet, the company behind the farm, Ÿnsect is focusing on ways to use insects to shrink the environmental footprint of agriculture.

The farmers believe that insects are a sustainable way to replace other animal proteins in the supply chain, by using them to feed fish and livestock or in pet food. The waste produced by the hundreds of millions of insects can then be used to fertilise crops.

“Our ambition is to revolutionise the food chain which, literally, starts from the basics: insects and soil,” says Antoine Hubert, co-founder, president and CEO of Ÿnsect. “It concerns all of us, whether we are meat lovers or vegans because it is how our plants and animals are fed.”

The company claims that by cultivating mealworms in their vertical farm, they can use 98 per cent less land and significantly reduce the carbon and biodiversity impacts of protein production.

The UN Food and Agriculture Organisation (UN FAO) predicts that by 2050, food production will have to grow by 70 per cent to meet the rising demands of growing global populations and increasing wealth. Most of the available land for farming is already being used, which means more innovative, sustainable solutions will need to be used for everyone to be fed.

The project has some big backers too and Marvel star Robert Downey Jr. is one of them. He has launched an initiative to clean up the planet using artificial intelligence and technology, called the Footprint Coalition which has invested in the farm.

A post shared by Footprint Coalition (@officialfootprintcoalition) on Oct 20, 2020 at 10:31am PDT

One of the uses for the company’s insect protein is for feeding fish. Farmed species, including salmon and prawns, are often fed using wild caught fish which puts more strain on the stocks left in our oceans. Soy is another option but imports of the protein-rich bean have been linked to illegal deforestation.

“Ÿnsect isn’t just about insect farming: with climate change and increasing populations worldwide, we need to produce more food with less available land and fewer resources, so that we’re not clearing forests and emptying our oceans,” concludes Hubert.