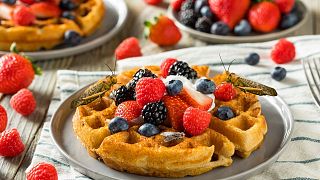 Belgian researchers serve up waffles made of insects as a healthy replacement for butter.

“Insect-based fat is a sustainable and healthy alternative to butter,” the research team at Ghent University in Belgium says. “When less than half of the butter is replaced by insect fat, you can hardly taste the difference.”

Eating insects isn't exactly mainstream. Popularity is mostly confined to countries in Asia. But that could all be about to change. Some forward-thinking European and American restaurants have trialled the delicacy. The benefits are many, but insects seem to suffer from an image problem. So what’s needed to make eating insects mainstream?

What are the benefits of eating insects?

Bug-based gastronomy could be the future. United Nations food experts have been pushing insects as a source of nutrition for years, claiming that their consumption could reduce greenhouse gas emissions due to less livestock pollution.

Nutritionists agree that insects are high in protein, vitamins, fibre and minerals

A 2013 report by the UN's Food and Agriculture Organisation describes edible insects as a "good source of protein that could help sustain life" and highlights caterpillars, already a popular food source in Central Africa. According to the report, the world's population will reach 9 billion people by 2050, meaning more alternative food sources will be needed.

Nutritionists agree that insects are high in protein, vitamins, fibre and minerals. But cost is a problem. Products made from insects are currently five to ten times more expensive than their traditional butter counterparts.

It's also important to bear in mind that, as yet, we don't know enough about the long-term consequences of farming insects in large quantities. A lot of questions remain unanswered, from which species are suitable to waste management. Further research is required, as a group of Swiss scientists highlighted last year.

Insect waffles were a hit with students

"The ecological footprint of an insect is much smaller compared to animal-based food sources," says researcher Daylan Tzompa-Sosa from Ghent University. She and her colleagues came up with the idea of testing the insects as ingredients in cakes and sweets, such as waffles, hence making them practically unnoticeable.

Students who blind tested two different waffle recipes could not detect which of them was made with insect fat. "They are pretty much alike. I wouldn't be able to tell the difference," Colombian student Daniel Ariza told AP.

"I don't feel that they are disgusting, I think it's just like the future," said another student, Lina Ojeda.

Watch the video above to see the researchers making waffles with insect fat.