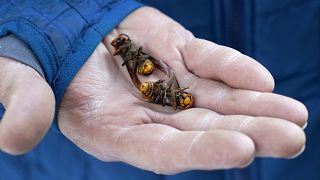 Scientists in Washington claim they destroyed a nest of so-called murder hornets in the "nick of time".

They discovered 500 live hornets in various stages of development in addition to nearly 200 queens that could have started their own nests.

"We got there just in the nick of time,″ said Sven-Erik Spichiger, an entomologist leading the fight to kill the hornets.

The giant insects that can deliver painful (but rarely deadly) stings and could wipe out entire hives of honey bees.

Scientists think other nests already exist and say it's impossible to know if any queens escaped before the first nest was destroyed.

These Asian giant hornets are not native to the US and kill a few dozen people a year in Asian countries.

The goal is to wipe them out before they spread, Spichiger said.