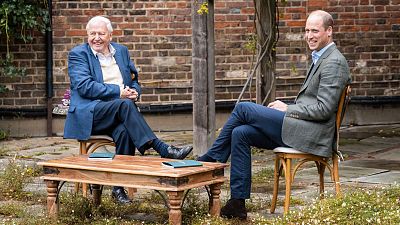 The Duke of Cambridge launched the prize today with an appearance on the BBC alongside David Attenborough.   -   Copyright  The Earthshot Prize
By Rosie Frost  •  Updated: 08/10/2020

A new environmental prize launched today by the Duke of Cambridge will see €55m awarded over 10 years to those finding solutions to the climate crisis.

The Earthshot Prize is being called “the most prestigious global environment prize in history” and aims to help save the planet by 2030. In the next 10 years, five €1.1m prizes will be awarded every year, with a goal of funding at least 50 environmental projects. It is inspired by John F. Kennedy’s “moonshot” plan which united millions of people behind the idea of humans setting foot on the moon.

There are five “Earthshots”, or goals, to protect and restore nature, clean our air, revive our oceans, build a waste-free world and fix our climate. The Earthshot Prize Council, whose members span six continents, will decide on a winner per category, alongside the Duke of Cambridge.

“By 2030 we really hope to have made huge strides in fixing some of the biggest problems Earth faces,” said Prince William on the BBC’s Today programme.

He said that positivity was “the key thing about the Earthshot Prize” adding that he was worried for the mental health of younger generations suffering from anxiety about the climate crisis. “It’s the idea we need to find solutions to be able to live our lives and enjoy our lives and not feel guilty and bad about some of the things we do.”

The prize has been launched after two years of work by Prince William and The Royal Foundation. It is underpinned by scientifically agreed targets like the UN Sustainable Development Goals and other internationally recognised green measures.

In addition to the council, a Global Alliance of environmental organisations will also support the prize. These include organisations like Greenpeace, Conservation International and the UN Environment Programme.

WWF is also one of the partners working closely with The Royal Foundation to support this global effort to protect and restore the environment.

“Advances in science, technology and global communications mean we now know with astonishing detail what happens if we don’t reverse the damage to our planet,” says Colin Butterfield, Executive Director of WWF UK.

“But what if we could use those same advances to change direction? In just 10 years we can go from fear to hope, from inertia to inspiration. The Earthshot prize challenges us all to make this the decade we can build a future to be proud of.”

Natural disasters have doubled due to climate change, says UN