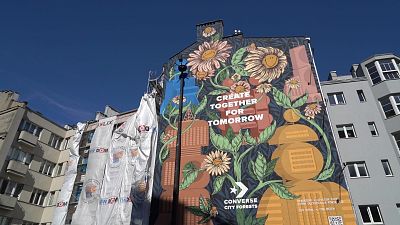 A piece of public art has been created in Warsaw, Poland using paint that removes pollution from the air.

The art features smiling plants and flowers intertwined with futuristic buildings and is part of a series by American shoe manufacturer Converse called City Forests. The company is sponsoring a series of murals around the world using paint which breaks down noxious pollutants.

KNOxOUT paint reacts with nitrogen oxides (NOx), emitted by cars, factories and power stations when they come in contact with the surface of the art. Sunlight acts as a catalyst for a process that turns the NOx into water, small amounts of CO2 and calcium nitrate.

The calcium nitrate is washed away when it next rains leaving a fresh paint surface to start the process all over again.

A central concept for the project was the idea of ‘planting trees’ where they might not otherwise be able to grow. Alongside the piece in Warsaw, there are already two others in Bangkok and Belgrade with 12 murals planned in total.

Converse estimates that the pieces of artwork painted around the world so far have the same air cleaning capacity as 1470 trees.

The Warsaw mural is opposite the Politechnika metro station, a location chosen by local artists Dawid Ryski and Maciek Polak.

“In my dream future city, billboards would disappear, and everybody here would switch from cars to bicycles,” said Dawid Ryski. “I tried to make sure that these were actually the buildings of the future – as you can see, they are free from billboards and that Maciek could fit in his plants beautifully,”

Maciek Polak incorporated vegetation in the mural, a motif that is very often present in his work. “I think that nature is a perfect inspiration for an artist’s work because it has endless possibilities in terms of shapes, colours and forms.”