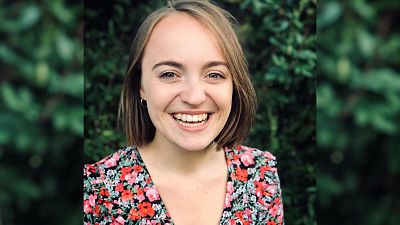 “When you feel sort of hopeless, it’s important to use your craft in a way that feels you’re giving something rather than taking away.”

London-based poet and environmentalist Ella Duffy is explaining how she feels the arts and the climate crisis intersect. “It’s about opening up the conversation in a new way,” she says.

At 25, with her first collection published earlier this year, the former Foyle Young Poet of the Year has just handed in the manuscript for her second book when we talk, provisionally titled ‘_Rootstalk_’. It’s a single, narrative poem about one of the world’s rarest plants, epipogium aphyllum - or the ghost orchid.

The elusive flower was rediscovered in the UK in 2009, the first sighting for 22 years. The ghost orchid’s ephemeral nature means it is shrouded in mystery. It lurks underground for the best part of a decade, before sprouting, taking a fleeting breath, and retreating back into darkness once again. Sites where the plant grows are kept secret to protect the species, adding to the seemingly magical nature of the flower.

“There are these amazing stories about the women who have found the flower throughout history,” Ella explains, “like in the 1920s all these botanists were hunting it down, and found bits, but not the whole flower - and I just love those stories.”

Rootstalk is made up of a collage of voices and characters, “at the centre is the idea of searching - all the characters are searching for something, either physically or internally. And that searching manifests itself as the ghost orchid,” she says.

Ella first learned of the ghost orchid in a National Geographic article, and was drawn to the peculiarity and mysticism of the plant. “I’m drawn to stories for their strangeness, I find them more interesting to draw upon - and just this idea of a flower that lives underground for decades. I found that really exciting.

“The idea of botany is almost like a type of witchcraft. It’s like another world, and there’s just something quite fascinating about things you don’t fully understand. The botanists’ research involved amazing sketches of these orchids, preserving flowers in formalin, and pressing roots in between pages of books. It’s all so strange - I love it!”

‘I was obsessed with nature as a child’

Nature is something which has long been a fascination and a source of ideas for Ella. “I find that I write about nature without even thinking about it, the natural world just kind of seeps into my writing without me really noticing,” she explains. “I love that nature is a full body experience; something alive, changing and unpredictable - with just so many exciting stories.

“I think it all goes back to when I was younger, obsessed with finding things in the garden, and searching for tiny creatures. I loved just staring at caterpillars for hours. As I grew up, and now as a writer, I’ve tried not to lose that way of looking at things - the way a child will look at nature.”

Growing up in Manchester, UK, Ella appreciated the ease of access to nature, from the River Mersey to the Peak District, pitted against the city's industrial core. “I was lucky to grow up in such a green space, within a short walk you would somehow just arrive in amazing countryside, and you’d never know that you were actually in the city.

“I think being somewhere that is in some ways so green, and then suddenly you are in Manchester city centre, with the red brick and glass and trams - that contrast is so surprising. I love how complex our living is, and where humans fit into the natural world.”

Nowadays Ella lives in London, but has managed to maintain that same rural balance within an urban setting. “I’m lucky enough to live really close to Battersea Park, which again you wouldn’t really know was London. The wildlife is so amazing, like the herons walking about, and it just isn’t the London experience I expected when I moved there. I love mixing these two worlds up as a writer; I think as people we need a balance.”

Ella’s first short collection, New Hunger, features a poem about a praying mantis feasting on its prey. The idea of cruelty is essential to her understanding and appreciation of nature. Instead of focusing on the natural world as a sanctuary, Ella is drawn to its violence and menace too.

“Lots of my poems do tap into environmental issues and nature, but they're not nice,” she says. “I like tapping into the complexities of the natural world and how it isn't all lovely woodland creatures and birds landing on your shoulder pads. I like the sinister elements.”

These themes have made their way into her new work too, especially under lockdown as Ella has been staying with her girlfriend’s family in the Kent countryside.

“I have found that a lot of the landscape here has made its way into the book,” she explains. “Growing up in a city, you think the countryside is so idyllic, so peaceful - an Eden. But it’s not at all. It’s pretty brutal! You can be out for a walk and see a buzzard swoop down and snatch a baby rabbit in front of you. I love that contrast.

“I’ve always been drawn to the villains in stories growing up, and I can see that when I write about things now which are a bit grim. It’s more fun, because it’s too simple to just completely romanticise nature.”

Ella jokingly refers to herself as a “cynical” version of a Romantic poet instead, looking for the duality in things, exploring the bad within the good - particularly when it comes to humans’ interactions with nature.

“Our relationship with the natural world is such a difficult and complex one, balancing the ways we harm it, while being desperate to maintain it. I mean, we’re in an age of houseplants - but at the same time are destroying the outside world!”

A long-time vegan, environmentalism is embedded in Ella’s identity, both as a person and a poet. Along with her girlfriend Flo, Ella founded bind collective “to raise awareness of the climate emergency through creativity.” She feels that poetry, and art more generally, helps open the climate conversation up in new ways, attracting different people to the movement.

“I read big, intimidating articles with data and facts - and it can be hard to find an emotional response sometimes. I find that with writing poetry, it’s a way to offer a new approach to such a huge topic. I think imagination is such an important part of that too,” she explains. “I’m not saying every reader must have an emotional response to my work,” Ella jokes, “but if one reader thinks about something differently, then I’ve done my job as a poet.”

As writers, she says, one of our roles is to respond to the present reality. And in these times, our relationship with the natural world deserves our attention.