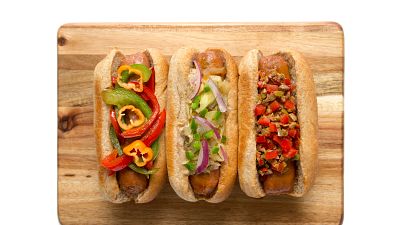 The march of plant-based foods cannot be stopped.

That’s despite a report emerging this weekend that suggested eating organic meat could in fact be better for the environment than a mass shift to vegetarianism and veganism. The report, by Johns Hopkins University in Maryland, USA found ditching meat in favour of dairy products like halloumi and yoghurt had a minimal impact on carbon output compared to meat production.

Instead, researchers suggested increasing the amount of fruit and veg people eat, while cutting down on dairy and eating meat just once a day.

However, the tide has already been turning and the trend is showing no signs of slowing down thanks to a mass of previous studies and warnings from academics, thinktanks and even the UN, suggesting the average global citizen must drastically cut their meat consumption to mitigate climate change.

Restaurants and retailers have risen to the new challenge with aplomb. Even those who have built their business on the meat trade - think KFC and sausage brand Richmond - have launched veggie options over the summer.

Read More | How to become a more sustainable meat eater

If you’re still determined to cut down on animal products, if not give them up entirely, here are some of the latest alternative (and entirely vegan) innovations:

By Beyond Meat, famous for its burger which launched in Europe last year and has since appeared in shops and on menus as a staple for meat avoiders.

Beyond is hoping to achieve similar success with its sausage, which is set to launch in Tesco stores in the UK this week.

It will also go on sale in Neat Burger, London’s new burger joint which has received backing from celebrity vegan Lewis Hamilton.

Swedish veggie brand Oumph! has just rolled out a range of on-the-go snack products for eating while on the move.

Read More | Could a plant based diet be making you dumb?

So popular was the burger that is sold out within hours at the handful of stores it was trialled in. Like the Greggs’ sausage roll, it proved such a hit that more had to be ordered to fulfil booming demand.