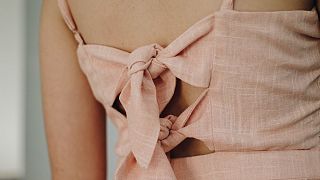 As more consumers rightfully demand to know the origins of their clothes, fibre production is being put under the microscope. As a result of striving to create environmentally friendly products, some companies have created textile fibres that are also beneficial to skin. Could this dynamic relationship be the new way forward for the textile and fashion industry? The following examples highlight how these fibres could change the future.

**QMilk **has ingeniously created a fibre that is not only beneficial to the environment, but also to its owner. Microbiologist, turned entrepreneur, Anke Domaske is the CEO and Founder of the QMilk product and they have cleverly identified a method to recycle undrinkable German milk to form a sustainable textile fibre. The fibre is produced with minimal effect on the environment, focusing on using renewable and natural resources while triumphantly rejecting the use of chemicals.

What makes QMilk significant is the benefits it brings for its wearer as milk naturally brims with minerals, vitamins and protein. Through Domaske’s clever approach of eliminating chemical processing, the fibre retains these positive elements and can be highly beneficial to the skin. The fabric contains 18 amino acids which are proven to be, anti-bacterial, can help with anti-ageing, has the ability to regulate body temperature and can can assist with blood circulation. This is the ultimate example of how the right fibre manufacturing methods can have multiple positive effects. Since being patented, the company has re-branded to QMilk and now produces cosmetics.

Nanonic Inc has combined seaweed and cellulose to create a fibre called SeaCell that’s made entirely of raw, renewable materials. SeaCell is constructed using the Lyocell manufacturing process, which is considered to have minimal effects on the environment. The traditional Lyocell process was developed in 1972 and involves using dry jet-wet spinning to create a unique fibre. Nanonic Inc has brought this method into the 21st Century by ensuring the naturally rich nutrients of seaweed are preserved.

The fibre (SeaCell) produced by Nanonic Inc has many advantages and this is mainly thanks to its seaweed component. Since the era of Chinese Medicine, the seaweed plant has been affiliated with providing benefits to humans. As a result, the SeaCell fibre contains anti-inflammatory properties and a fibre structure that encourages an exchange of nutrients between fabric and skin. Some of these nutrients include calcium, magnesium, iron and vitamin E. The fibre is also soft and breathes well. SeaCell has experienced notable success in the activewear world, boasting collaborations with giants such as Lululemon.

Singtex Industrial Co has turned one of society’s biggest addictions into a sustainable product. In 2018, The Independent revealed that on average, Brits drink 95 million cups of coffee a day – producing an overwhelming supply of used coffee grounds. Instead of discarding these, Singtex developed a new fibre using a recycling process that has a low environmental impact.

Their final creation is the S.Cafe yarn, a product which prevents 500 kilograms of coffee grounds going to waste every day. The process that generates the final yarn saves energy, requires a low temperature and high pressure. The final fabrication has micro-pores which reflect UV rays and absorbs odours. The fibre also has an advantageous drying time which is 200% faster than cotton. Singtex has collaborated with brands including Asics, New balance and Timberland.

The fashion and textile industries are under scrutiny to provide products that are sensitive to the environment. However, interestingly, awareness of the environment can be coupled with concern for the wearer. Could this combination encourage consumers to care more for their garments and to re-think the indispensability of fashion items?