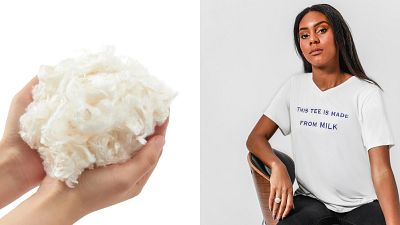 An LA-based startup is making eco-friendly t-shirts out of excess milk.

You may have already heard of various alternative materials coming to the fore in fashion, like hemp, linen and even pineapple leather. But the white stuff we pour over our cereal every morning - not so much.

Mi Terro uses biotechnology to re-engineer food waste into sustainable fibres that can replace plastic in the fashion, medical and packaging industries. Why milk? 128 million tons of milk is wasted every year, according to the brand, and this generates around 3.3 billion tons of greenhouse gases.

Instead of letting it go to waste, CEO Robert Luo came up with the idea of turning spoiled milk into protein, which can be spun into fibres to form a yarn. He works with a team of PhD material scientists and chemists, who are all experts in protein activation.

The method starts by extracting casein protein from the bacteria grown in ‘bad’ milk that has gone off. Then a process called Sea-Re (Self-assembly Purification) purifies it into ‘good’ protein. The proteins are isolated and finally solidified into fibres which are stretched and spun into yarn, ready to be used to make clothing.

"We are redefining the circular economy in which everything begins with food waste and ends as recyclable or biodegradable," the CEO tells Euronews Living.

How did it all begin?

Mi Terro's journey began when founder Robert Luo visited his uncle's dairy farm in 2018. Luo was shocked to see “buckets and buckets” of sour and spoiled milk sitting at the farm. Upon returning to the US, he felt compelled to start researching ways to solve this problem.

Since launching in June 2019, the brand has made over US $100,000 (€88,859) and sold products in 40 countries worldwide, the CEO said in an interview. The t-shirts come in over ten styles and are soft, breathable and machine-washable.

The American brand is now in talks with leading dairy companies in China over strategic partnerships.

According to the European Commission, around 88 million tonnes of food waste is generated annually in the EU. This comes with associated costs estimated at 143 billion euros.

Environmental charity Hubbub offers advice on how to make your food last longer. Tips include planning meals in advance, making the most of cupboard staples and batch cooking for the freezer.

Otherwise, there are apps you can use to ‘rescue’ over-produced food from cafes, restaurants and grocery stores in your city. Karma connects vendors with excess food to hungry customers on the lookout for a bargain, and has already saved 295 tonnes of food since its launch in 2016. Too Good to Go is another similar app, comprising of a “community of waste warriors” and is available in nine countries across Europe.

So while you might not be able to whip up a wardrobe from your own ‘off’ milk, there are plenty of ways to reduce waste and make the most of the food you buy each week.