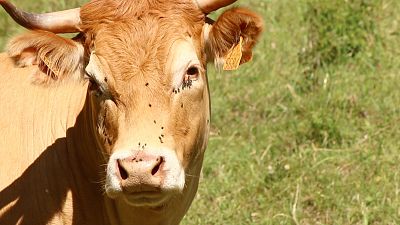 In this episode of Climate Now we dig into agriculture to see how farmers are adapting to our warming planet, exploring the challenges they face, including severe droughts and heatwaves.

On a global scale we can say that it was the warmest month of May on record, with temperatures of 0.6 degrees Celsius above the 1981-2010 average.

That is the headline figure, but there was a great deal of variability. From Scandinavia down to the Black Sea, there were colder than average temperatures because of a persistent flow of cooler air from the north west. One of the other big trends over the past few months has been warmer temperatures in Siberia, and last month was no exception, with temperatures up to 10 degrees warmer last month.

In Australia, in parts of Brazil and Canada it was cooler than average, but everywhere else in red and pink on the map below was warmer than average last month.

Another key trend this springtime is that it has been much drier than average across large parts of Europe. The maps below show soil moisture and precipitation anomaly with the large red band indicating the top layer of soil is drier than average, and the level of rainfall is lower than average.

The dry weather in Europe will have an impact on farming, and we set out to investigate what it means for those on the ground by visiting the Ardèche department of France.

Aurélien Mourier has worked his 80 hectare farm, 'La Ferme de l'Amélie' for 15 years, and the property has been in his family since 1880.

One of the key trends of climate change - more frequent and longer droughts - is a major concern for him.

"We can't work in the same way as we did. For us it's pretty upsetting that our animals can't drink naturally in the fields anymore."

Aurélien's farm used to produce enough forage to be self-sufficient, but now he has the extra burden and cost of buying forage from late spring onwards.

"The biggest changes in the last few years is really the successive droughts. We've suffered three serious droughts the last three years, and we've already had a drought this spring, meaning a huge drop in the production of forage," he says.

For water, he explains to us that it's the same story: "This is a field where there was a spring and a stream. Today the stream hardly ever flows all year, the spring has dried up. So we have to supply the cows with this cistern."

Scarcity of water, rising temperatures, and an increasing lack of certainty are issues many farmers face now. Meanwhile they have to keep producing food, and respond to pressure to cut their own greenhouse gas emissions.

Many agriculture sectors are working to adapt to the risks, but it's probably not enough, according to scientist Patrick Bertuzzi from INRAE, the National Research Institute for Agriculture, Food and Environment: "Overall if we look at the changes in practices at the moment, we see tactical adaptations, that's to say we try to modify our practices, without changing the agricultural systems."

Those changes don't go far enough, he says, and a fundamental overhaul is inevitable. What's more, he stresses that climate scenarios could diverge into quite different paths from 2040-2050, depending on action to limit greenhouse emissions now.

"Depending on the evolution of climate change, and in particular if we stay on a business as usual scenario, meaning we don't do anything to limit (emissions) then eventually by 2070-2100 we'll have a complete change in the agricultural system, and even the countryside," insists Bertuzzi.

Back on the farm, Aurélien Mourier is doing what he can. He's reducing his herd of cows because they need so much water, and he plans to plant grape vines to diversify his production and be more resistant to drought.

"We have to adapt to huge changes, explains Aurélien, adding: "We see it every day, the seasons aren't the same anymore, the patterns of rainfall and heat are so different that we're forced to fundamentally change our way of working."