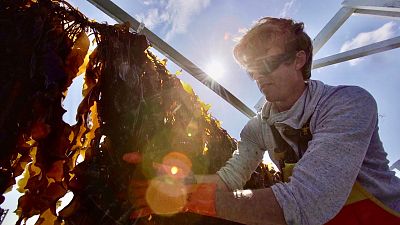 Seaweed farming may be unfamiliar to most Europeans - but there's a growing movement to change this. In 2012, in the southwest of the Netherlands, Dutch business consultant Rebecca Wiering and American lawyer Jennifer Breaton set out on a mission to make the food industry healthier and less wasteful.

"Affectionately, the country calls us 'the two ladies with the seaweed'. But essentially we were really entrepreneurs looking at how can we start creating food that is healthy for people, and that is responsible, and that is tasty. And then one day we heard the word 'seaweed' and we thought, hey, wait a minute, there's something going on there," explains Wiering.

Over the years, the small farm has grown by constantly improving its methods.

Remaining true to its organic roots, it is now five times its original size. When we visit, a team are harvesting several tonnes of seaweed, using a hydraulic crane they designed themselves.

"Seaweed farming is a growing industry. Global production of macroalgae surpasses 30 million tons a year — almost all of that in Asia. European production contributes only around 1% to global figures — and that small fraction mostly comes not from farming, but from harvesting of wild stocks."

Wiering adds: "Why was nobody farming? Because If you want to farm in Europe, you have to do it sustainably. You cannot just throw a lot of pesticides and bad stuff in the water. You need to do it really responsibly. Well, that was exactly what we liked! Ok, the more difficult it is - ok, let's make that work!"

The Zeewaar farm has made sustainability its guiding philosophy and USP. Unlike cheaper imports, their seaweed is locally grown in a protected natural area with no added chemicals: every tide feeds it with nutrients from the North Sea and nearby fish farms.

"The most important thing is sunlight, sunlight and nutrients," says Matthijs Stroosnijder, Zeewaar's Farm Director. He goes on to explain: "And for the rest, it's all nature. The fish and other creatures that live here are very happy with the seaweed, and they have a sort of a symbiosis. So they work together, of course, — and it works very good, you see, that's a good crop this year,"

The farm cultivates - Saccharina latissima, or Royal Kombu. The marine plant has a range of possible uses, from cosmetics to fertilisers and biofuels. The farmers ,however, believe its taste and health properties make this particular seaweed even more valuable as a food.

"It's so subtle, you cannot really describe the taste. You would have to experience it to explain the taste to people - I cannot explain it. It's slightly silty. It's almost like a salad - yeah, it's a salad," says Wiering.

Yields largely depend on the quality of seedlings planted on floating cultivation lines in the autumn. Zeewaar doesn't produce its own seedlings - it seeks to maximise its chances by buying starting material from a specialised breeding company called Hortimare.

A fast-growing Dutch supplier of seedlings, Hortimare works with seaweed farmers in many countries. One fine-looking sample has been sent in by a client from Norway in order to reproduce the spores which are perfectly adapted to local conditions.

"We propagate it here, we plan to breed it here, and then we send it to the Norwegian farmers, because the coast of Norway is where seaweed grows ecologically very well. And from just a tiny little sample like this, we can grow kilometres of seaweed line in the future," says Jessica Schiller, a Marine botanist at Hortimare.

The company constantly experiments to improve the quality and range of its seaweed strains.To help farms improve efficiency, it produces seedlings on coils of thin thread that can be easily attached to cultivation lines.

"What we see here is we have a coil of seedlings. And what we do is we will paint this coil with gametophytes, and then over three weeks they will turn into baby seaweeds. And then over time, we will sell this to different customers and they will outgrow this into larger seaweeds available for products et cetera," Joshua Masel, the Head of Cultivation at Hortimare.

With a growing range of reliable strains - and improving offshore cultivation technologies - Hortimare expects Europe's seaweed production capacity to increase tenfold in the foreseeable future. The hope is that will lead to further investment in this emerging sector.

"To be able to produce that much, there is a lot of investment needed to go to mechanised systems. So we need support from governments on legislation, but also on funding and we need industry to give us more support, to help invest in that," insists Haik van Exel, Hortimare's Managing director.

While regulatory hurdles can make it difficult to obtain farming permits, seaweed growers are pinning their hopes on a new EU strategy called Farm to Fork. Part of Europe’s new Green Deal, it aims to accelerate the economic transition to fair, healthy and environmentally-friendly food systems.

Zeewaar doesn't sell its seaweed directly to consumers - instead it works with food manufacturers, providing them with dry flakes, which factories can easily use.

"Now it's dry!..says Wiering, adding: "It's tough what we're doing. We're not making a lot of money. We need to put a lot of effort into the market to convince food producers, please use it! Try it! Give it a try, try it with your sauces, or with your spices, or try it in your chocolate drink, or try it as a tea, or try it as an herb... Demand is growing, but sometimes it does a little bit of this — it waves up, like the ocean, but going up!"

A retreat from meat

Just a few kilometres away from the seaweed farm we head to a North Sea beach. Despite the chilly water, the destination, a nature reserve, is a tourist trap. Located nearby, the Aloha Beach restaurant serves so-called "Dutch Weedburger", produced by a local company. The burger is vegan, and it includes seaweed.

"The algae is locally sourced, and it adds the umami taste. It also helps the burger patties hold their shape better, and replaces added salt which I think is a good thing," says the restaurant's chef, Mario De Pagter.

With meat substitutes becoming increasingly popular, European consumers may soon become more familiar with the taste and nutritional benefits of seaweed - as well as the sustainable way it is grown.

"The texture is just like a normal burger - it's a bit salty and it does taste very good!.. It's vegan, and that's a growing trend - more and more people come here because they care about nature," insists the restaurant's waitress Tamara De Pagter.

Back at Zeewaar, Wiering tells us she is convinced it will only be a matter of time before seaweed becomes a natural part of our daily diet.

"We do see change. It just goes very slowly, you know. But I guarantee you, we'll talk again in 13 years for now — you know, I'll be old and grey — and then you'll come up, and you'll have like packages of snacks of seaweed with you!"