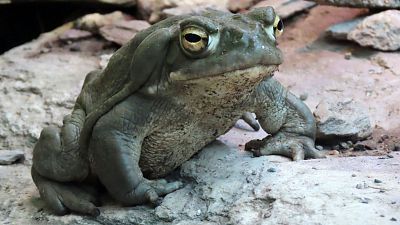 Wildlife experts are calling on the public to stop milking toads, as it is threatening the survival of the species.

The Sonoran Desert Toad, also known as Bufo Alvarius, possesses a potent psychedelic compound, called 5-MeO-DMT, which can be used for hallucinogenic purposes.

In order to get your hands on the white slime, you must tickle the animal’s glands until this is secreted.

“Licking toads will not give you warts or produce a fairy prince, but it might get you high,” wrote one author in the LA Times.

Why are conservationists making this plea?

Orally ingesting toad secretions has been referred to in popular culture and in scientific literature as 'toad licking' in the past, drawing much media attention.

But while the licking has become more of an urban myth nowadays, researchers are concerned that the process of overmilking could result in a danger to the species’ survival.

Robert Anthony Villa is a Research Associate at the University of Arizona Desert Laboratory and president of Tucson Herpetological Society. He warns that the toads are “susceptible to exploitation”.

In 2017, his appearance in an episode of psychedelics-based show, Hamilton’s Pharmacopeia, on Vice, saw him discussing what has become “an international toad venom smoking phenomenon”.

Villa then did an online presentation in September 2020 where he outlined the risks involved, covering the history and misconceptions surrounding this iconic toad, as well as conservation initiatives to help it.

The Sonoran Desert Toad, sometimes referred to as the Colorado River Toad, is found in northern Mexico and the southwestern United States.

The dark leathery green animal can grow to about 19 centimetres long and is the largest toad in the US, second to the non-native cane toad. It lives between 10 and 20 years in the wild.

Raccoons have learned to pull a toad away from a pond by the back leg, turn it on its back and feed on its belly, a strategy that keeps the raccoons well away from its poison glands, says Oakland Zoo in the US.

But over the last few decades, the toad’s natural habitat has been severely encroached by humans.

The species is classified as “endangered” in California and listed as “threatened” in New Mexico. Being continually abused by people searching for a psychedelic experience, however, might just push them over the edge to extinction.

Is there a synthetic alternative?

5-MeO-DMT can also be made in a laboratory - a solution that may protect the toads as thrill-seekers turn to synthetic alternatives.

A study in the journal ACS Omega reveals a new method for synthesising the drug that is 99.86 per cent pure.

To raise money for the toad's conservation campaign, Hamilton's Pharmacopeia director, Hamilton Morris, reissued a classic pamphlet on the toad with a new section on conservation and laboratory synthesis.

Villa was then a consultant on the pamphlet himself.

When vaporised, a single deep inhalation of the toad slime produces a powerful psychoactive effect within 15 seconds. The user usually experiences a warm sensation, euphoria, and strong visual and auditory hallucinations.

However, these results have been "misinterpreted as an excuse to harm toads," says Villa. The author of the report went on to write two more studies asking people to leave toads alone.

Some experts believe we already possess levels of DMT in our brains and claim the pineal gland is what releases it when we dream. The gland was described as the “Seat of the Soul” by French philosopher Descartes.

Inspired by the pineal gland, festivals and “transformational” retreats have even been created in which visitors allegedly take the drug together.

“Transformational” retreats have even been created in which visitors allegedly take the drug together.

One festival claims “ancient traditions [are] lovingly and respectfully continued” in an experience “infused with and inspired by nature”. But Villa points out that this may be a dubious claim, as toad slime was only discovered psychedelically in the 1980s.

Studies have shown that consuming the drug can produce “sustained enhancement of satisfaction with life” and can decrease levels of anxiety and depression.

But a 2019 trial at John Hopkins University, Maryland, also suggests that depression can be alleviated when users take the synthetic version of the compound. So it is not necessary for toads to suffer to improve humans’ wellbeing.