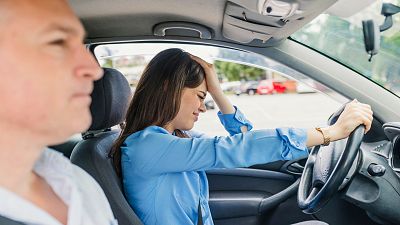 A study has found that since April 2019, the UK’s failed driving tests have emitted over 2 million kilograms of CO2 – the equivalent of 449 return trips from London to Melbourne.

Energy comparison site Save On Energy found that with almost one million failures at over 10 miles on average, the environmental impacts are huge.

Cancellations of driving tests in the wake of the COVID-19 pandemic meant that the number of emissions decreased by 77.5 per cent per quarter. But energy experts are still concerned about the implications.

The fallout from the pandemic even drove a petition with upwards of 57,000 signatures, calling for instructors to pass learners based on their previous merits. The government responded arguing that there were legislative barriers preventing them from doing so.

The number of male test failures alone is enough to power 126,193,249 smartphone charges, though they are marginally more likely to pass.

Liverpool, Birmingham, Manchester and Reading are among the worst polluters and are most likely to have their learners fail.

Despite this, London remains top for worst drivers in the UK - one in three admit to having a motoring accident in the last five years, according to Rooster insurance.

Save on Energy used 10 datasets which suggested the most common car for first time drivers in the UK is a Ford Fiesta, which emits 49mpg.

Preventing young people from the opportunity to drive, in the name of low emissions, isn’t as simple as it seems, says Stuart Capstick, Deputy Director and theme lead for the Centre for Climate Change and Social Transformation (CAST Centre).

“Learning to drive has been a rite of passage for young people for many years, but recent findings in the UK suggest it’s becoming less popular for a range of reasons. While we shouldn’t be looking to close off opportunities for young people, we should be making sure this trend moves in the right direction and for the right reasons.”

He continues, “finding your own freedom to travel is a big part of moving into adulthood, but it’s vital that is done in a more sustainable way in future. Habits we pick up in our teens and early twenties can stay with us for life, and so as much as possible we should be helping young people to get around in ways that don’t repeat the polluting mistakes of the past.”

This might include grants for people in their late teens and early twenties to hire electric vehicles or to purchase e-bikes, and making city spaces safer for active travel.

“The cause of CO2 emissions from transport is much less about failed driving tests, but down to the fossil-fuel based land transportation system we have, which has to change. Electric vehicles, better public transport and more active travel are a part of this change,” he says.