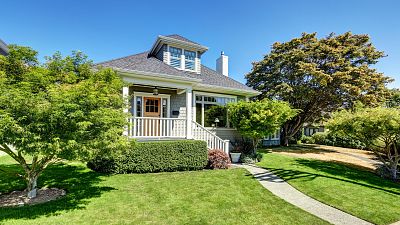 The prospect of buying a home is exciting. It’s likely to be the biggest purchase you’ll ever make, so securing a mortgage can be crucial to affording what you’re after. Mortgage loans are obtained from a variety of banks and building societies and usually run for around 25 years or until you finish repaying what you owe. However, interest rates are often high and with household bills, council tax, insurance and house maintenance, the whole process can end up being pretty pricey.

What’s the best way to get a mortgage with low interest rates? A green mortgage could be the answer. You might be lured in by the cost benefits at first, but the real advantage of a green mortgage is the reduced environmental impact of the property you’re buying.

What is a green mortgage?

A green mortgage is the sustainable alternative to a regular loan. Put simply, it’s a mortgage product where the cost of the borrowing is directly linked to the energy performance of the associated property. The idea is that the money the borrower saves by having a more energy efficient home should make them better able to make their repayments, as bills come to less each month.

As a result, interest rates tend to be lower as it’s less of a risk for the lender. According to a study by non-profit Institute for Market Transformation (IMT), owners of energy efficient homes are 32 per cent less likely to default on their mortgage payments.

What’s more, by moving into a property that’s more energy efficient in the first place, its value may increase. This is yet another potential incentive for buyers to go for a green mortgage. So it’s win, win, right?

Dr Daire McCoy is a research fellow at LSE, in the Grantham Institute on Climate Change and the Environment. He explains, “some evidence exists that mortgages against energy-efficient properties are less credit-risky.

“But, it is very difficult to disentangle the channel. It may be that the reduced energy costs of the building make default less likely, or it may be that people who live in more energy efficient home are less likely to default for other reasons,” he says.

Either way, investing in an energy efficient property lowers your carbon footprint, which is arguably the most important factor.

Energy efficient homes are the future

It’s no secret that we are in the midst of a climate emergency. While we still need homes, it’s vital that we start living more sustainably within them. From reducing food waste, to recycling and conserving water, energy saving is just one way we can do our bit.

Governments and banks alike are keen to incentivise green mortgages. “When you consider that mortgages are a commonly held financial product, this could be a simple way to get consumers on board with green investment,” states UK Finance on its website.

When you consider that mortgages are a commonly held financial product, this could be a simple way to get consumers on board with green investment.

But how does it work? The eco-friendly mortgages are available to borrow for two types of property. Either, you purchase a new-build home with a current sustainability rating, or you commit to invest in renovating an existing building to improve its environmental performance, explains the World Green Building Council.

Basically, the home you are buying must have a high enough Energy Performance Certificate (EPC) in order to qualify. To be eligible, the property must have a rating of A or B. The scale ranges from A-G, so A would be highly efficient, while G is low efficiency. Most older homes appear around a grade D, this is the average, according to a report by Uswitch.

But does it actually save you money?

Banks do offer lower interest rates for green mortgages, but how low is low? Questions have been raised over whether the reduced rates are anything to shout about - Energy Saving Trust, for one, is sceptical.

The fact that banks are offering green mortgages “is definitely encouraging but it’s not revolutionary”, writes Energy Saving Trust spokesperson Gary Hartley. For example, the rate of the Barclays green mortgage is just 0.1% below their standard rate.

“Better than nothing, but there are cheaper standard mortgage deals on the market,” he concludes.

While some smaller firms have offered green mortgages for a while, they have only been available as a mainstream product in the UK since 2018. In the April, Barclays started offering green mortgages, claiming that people buying energy-efficient properties would save £750. In February 2019, Nationwide Building Society created a £1 billion fund to help borrowers get a mortgage for energy-efficient homes. Smaller lenders like the Ecology Building Society have also started to provide discounts for homes that undertake certified packages of low carbon retrofit. Low-carbon retrofitting simply means making changes to an older property to make it more eco-friendly.

On a governmental level, the UK Department for Business, Energy & Industrial Strategy announced a £5 million fund to increase the number of green mortgages the same year. A further £10 million ‘innovation fund’ was also set aside to cut the cost of retrofitting older homes with more energy efficient infrastructure. Energy and Clean Growth Minister Chris Skidmore said, “To fulfil our world-leading commitment to reach net zero emissions by 2050, we need an overhaul of our housing stock to tackle the disproportionate amount of carbon emissions from buildings.”

Green mortgages have the potential to revolutionise the standard of millions of Europe’s buildings.

But elsewhere in Europe, countries are coming together to achieve their green housing goals. The World Green Building Council launched the Build Upon project in 2016. At the time, it was the largest collaborative project on building renovation, bringing together 2,000 organisations, across 13 countries, at over 100 events in 2016-17.

Together with the European Mortgage Federation (EMF) they collaborated to come up with EeMAP, a road map to establishing European green mortgages in future.

Currently, 37 major banks are on board around Europe, including Barclays in the UK, ABI in Italy, ASCB in Sweden, BNP Paribas in France, Bank Polski in Poland and DZ bank in Germany.

Buildings consume lots of energy, and in Europe the majority of buildings that we will be using in 2050 are already built, states the World Green Building Council. “There is an urgent need to increase the current rate of energy efficient building renovation from 1 to 3 per cent per year, to meet climate change targets set out in the Paris Agreement.”

“The mutual benefits for banks and borrowers mean green mortgages have the potential to revolutionise the standard of millions of Europe’s buildings – but only if they become a mainstream offering,” says CEO Cristina Gamboa.