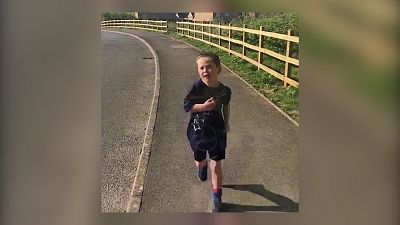 5-year-old Henry is running 2.6 miles (more than 4 km) a day for ten days to gain support for charity. He is one of the youngest participants of the country-wide charity campaign, 'The 2.6 challenge', a scaled down version of the 26 mile London Marathon that should have taken place today.

The 2.6 challenge is flooding social media, harnessing the fundraising reputation of the original running event, which would have raised thousands of pounds for charity. Funds that are needed now more than ever.

Organisers of the London Marathon teamed up to encourage exceptional social cooperation for UK charities after the 40th edition had to be postponed.

'The 2.6 challenge' campaign launches on 26 April, the Sunday when tens of thousands of runners were supposed to flood London's streets. Instead, participants, young and old alike, have been asked to dream up an activity based around the number 26. The activity will see them fundraise or donate to help the UK’s charities at this difficult time via twopointsixchallenge.co.uk.

The only requirement is that it must follow the Government guidelines on exercise and social distancing.

“The 2.6 Challenge can be anything that works for you,” says Nick Rusling, Co-Chair of the Mass Participation Sports Organisers group (MSO) and CEO of Human Race. “You can run or walk 2.6 miles, 2.6km or for 26 minutes."

"You could do the same in your home or garden, go up and down the stairs 26 times, juggle for 2.6 minutes, do a 26-minute exercise class or get 26 people on a video call and do a 26-minute workout – anything you like," he explains.

Are charities the next victim of the pandemic?

While thousands of fundraising events across the UK have been cancelled due to COVID-19, the National Council for Voluntary Organisations (NCVO) CEO, Karl Wilding estimates that the UK charity sector will lose £4 billion (more than €4.5 billion) in income as a result of the pandemic.

Many of these charities have had to reduce or stop services at a time when vulnerable members of society need them most. Some organisations may not exist by the time the pandemic is over due to a loss of funds.

2 Wish Upon A Star is one charity that needs help at the moment. To keep their important missions of supporting bereaved parents alive, 5-year-old Henry in Miskin, South Wales put on his running shoes. After just a few days he had already raised £3000 (more than €3,400) for the charity. It may not turn out to be a regular habit, though, "he had thoroughly enjoyed running and runs really well, I asked him if he would like to go for a run next week when the challenge is finished and he said that he would like some time off to learn to ride his bike, " his mother Katey told Euronews Living.

Michelle from Worcester, England, is another enthusiastic participant, who put on a ladybird costume to play Dotty, the mascot of the Grace Kelly Childhood Cancer Trust, and completed 26 star jumps to raise money for this charity.

Numerous celebrities joined the cause using all kinds of ideas to raise attention and above all, money. British Olympian, Jessica Ennis-Hill starred in an Instagram video to show what can be done with just a cheese-grater and a golf ball.

For further inspiration, watch the video above to see Henry and other participants complete surprising activities for the #TwoPointSixChallenge.