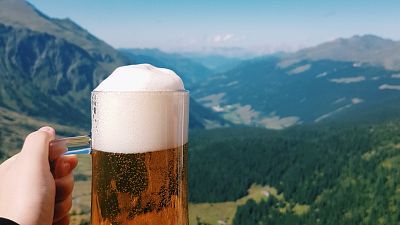 With hundreds of independent beer suppliers struggling to survive in coronavirus lockdown, one online platform is giving Europeans access to local breweries via home delivery.

Buying local produce is widely recognised to be a more eco-friendly way to live. The idea is simple, the closer you are to the source of your food/drink, the shorter the distance it has to travel and the smaller your carbon footprint. Wholesaler Simply Hops has launched Beer is Here, a website linking hundreds of artisanal beer brands together in one place so that drinkers all over Europe can buy from their local supplier.

The service is free and all the money goes towards the independent brands, providing them with much needed support at a time when pubs and bars have been forced to close.

"Without continuing to support these businesses now during the lockdowns across Europe we risk not having them later, meaning we lose something special,” John Willetts, Director at Simply Hops, told Euronews Living.

So far, almost 1000 breweries have signed up and just under 28,000 users have logged on to search for craft beer, he said. Countries include the UK, France, Germany, Spain, Portugal and many more. “The global phenomenon of ‘Localisation’ has been assisting in the reduction of carbon footprints considerably, as well as giving us access to wonderful products unique to our areas.”

According to The Brewers of Europe, based in Brussels, employment generated by beer is high in the European Union with around 2,300,000 jobs counting on it. Alongside representing the rights of brewers as a trade union, The Brewers of Europe also promote the role of beer in society and its “positive contribution to the community and people’s balanced lifestyles.”

The importance of eating locally

When it comes to food, there is increasing demand in Europe for imported vegetables like bananas that only grow in subtropical climates. Imports of fresh avocados to the European market increased from 186,000 tonnes in 2011 to 343,000 tonnes in 2015.

In fact, ninety-five per cent of the fruit and half of the vegetables sold in Britain is shipped over from other countries. YouGov Omnibus statistics show that 79 per cent of us think it’s important that people in the UK buy locally sourced produce, yet only 30 per cent had actually bought any in the last week.

Supporting local food aids your local economy, helps to create community and connection and means produce is likely to be more fresh and therefore tastier, explains the Food Revolution Network. Local tends to go hand in hand with seasonal, which means food is not stored for out of season consumption, it’s best consumed as and when it is grown. A good way to keep in touch with food and drink that is grown each season is to consult a seasonality table so you can tailor your shopping trips appropriately.

Locally sourced fruit and veg boxes, like Oddbox and Abel & Cole, are another way to get your weekly fill and save "ugly fruit and veg from landfill".