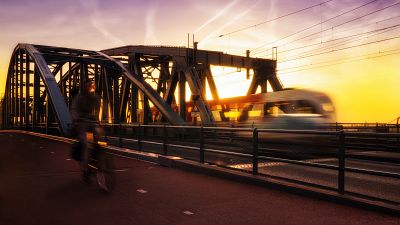 The British government has released a report addressing the decarbonisation of transport as part of its national climate crisis strategy.

The plan states that “rapid and unprecedented action” will be required to effect change, with hopes to reduce car use and make the UK a hub for green technology in the run-up to the COP26 climate talks in November.

Aiming to start a “green transport revolution”, it is split into six strategic priorities which will enable the UK to reach net zero by 2050. The report pays particular attention to active transport, in other words, walking and cycling.

During the coronavirus outbreak especially, cycling and walking are encouraged as a safe way to exercise.

Public transport also comes under the active transport umbrella, as some sort of physical activity is usually involved in getting to and from bus stops or train stations. The government report hopes this will soon become “the natural first choice for daily activities.”

The six priorities are:

In short, it covers how we travel, how our goods and services reach us and deployment of clean technology. The report comes after the Prime Minister, Boris Johnson, announced £5 billion worth of investment in local buses, cycling and walking infrastructure on 11th February this year. This includes funding for at least 4,000 zero emission buses to make greener travel a convenient option, improving the frequency of services and implementing more affordable fares.

Rail travel is also being considered a more eco-friendly alternative to car use, described as “one of the most efficient ways of moving high volumes of people into city centres and moving people over long distances” in the plan.

The UK could even see a shift towards solar-powered trains, via the ‘Riding Sunbeams: First Light’ project in future, it specifies. The sporadic nature of the energy resource, sunshine, means it can be deployed almost anywhere, “from small rooftop arrays to solar farms a mile wide.” This project would be the first time anybody has connected solar generation directly to rail traction networks to power trains.

For Greg Archer, the UK Director of Transport Environment campaigning for sustainable transport in Europe, it is time for the government to “translate its good intentions into firm actions.”

“There is no silver bullet to decarbonising transport”, but at least the new report is “balanced”, he says. “Phasing out the sale of new cars and vans with engines by the early 2030’s is both essential and entirely feasible; but this must be complimented by reducing car use.”

The UK must move away from building new roads and instead allocate more “space and funding for walking, cycling and public transport,” Archer continues. Whether the government “is willing to make these tough decisions remains to be seen.”

Mode of transport depends on the region

The report also details the discrepancies throughout the country when it comes to choosing a mode of transport for travel. Across Great Britain, 68% of workers typically travelled to work by car in 2018, but the number dropped significantly in London, with a much lower proportion of just 27%.

According to the research, providing people with the right amount of information on the environmental impact of their journeys could help them change their habits. If the public can “access clear, transparent information about the emissions associated with their journeys, then this will enable more informed decisions about how individuals and goods travel,” states the report.

The good news is electric car sales are on the up. There are record numbers of electric vehicles (EVs) on roads and, in 2019, the UK was ranked the third largest market for ultra-low emission vehicles in Europe. There are now over 240,000 battery electric and plug in hybrid vehicles registered around the country.