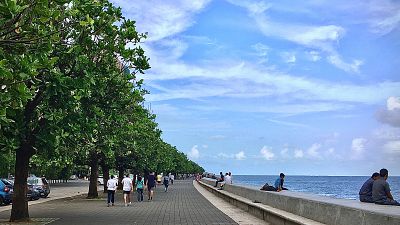 With cars off the roads and factories closing, India’s megacities are producing unprecedentedly low levels of air pollution. The result? Citizens enjoy blue skies as the heavy, grey smog clears.

The coronavirus pandemic is indirectly improving air quality in India. Roads are usually overcrowded with cars, rickshaws, buses and motorbikes. But as New Delhi and at least 75 Indian districts go under lockdown, streets are empty and locals report it is easier to breathe.

Levels in India’s financial capital, Mumbai, are now at a moderate 90 on the Air Quality Index, as opposed to an average of 153 this time last year, reports Reuters. In New Delhi, a megacity with a population of 26.7 million, levels have dropped to just 93, versus 161 in March 2019. Air quality is considered good when the number falls below 50.

As of 2020, India is the third most polluted country in the world, closely preceded by neighbours Bangladesh and Pakistan. The drop in air pollution is largely down to a “huge reduction in vehicular traffic,” Dr Gufran Beig, project director at the government environment monitoring agency SAFAR told Reuters.

Despite the positive news, "some emissions sources, like energy production and residential use of energy, are not likely to decrease notably when more people have to stay at home," says Vincent-Henri Peuch, Director of the Copernicus Atmosphere Monitoring Service. "Traffic is expected to decrease strongly under lockdown, of course, but in the phase beforehand, people may be using their private car more frequently, instead of public transport," he told Euronews Living.

India is not the only country observing an improvement in air quality. When the coronavirus outbreak first took hold in China back in December, NASA was already seeing a drop in air pollution in the Chinese Hubei province. By March of this year, Spain’s Directorate General for Traffic registered a 14 per cent plummet in rush-hour traffic in Madrid and in Italy, NO2 levels in Milan and other parts of northern Italy have fallen by about 40 per cent.

One campaign group, Help Delhi Breathe, has been fighting dangerous levels of air pollution in India for a number of years already. Working on a regional level, it comprises a mixture of concerned citizens and businesses co-operating to provide residents with the safe air they deserve.

“Clean air is a human right, and a major contributor to good health. Delhi needs to find urgent solutions to this terrible problem, and lead the way,” the campaign group states.

Help Delhi Breathe also offers advice and provides protective measures for residents. “Air pollution is worst early in the morning, which is also when many people tend to go out for exercise or walks. Try to avoid this time for exercise or overexertion if at all possible,” it says. The group also suggests “avoiding hotspots like busy roads” and wearing a “well-fitting mask with a high quality filter [which] can be an effective measure against the inhalation of even the smallest harmful pollutant particles.”

The campaigners report that 30,000 people are now dying prematurely every year in New Delhi because of air pollution. They propose an action plan to combat this frightening statistic, which includes lobbying for accurate information to be disseminated to the public, calling for a transition to solar energy and cleaning up public transport with green buses, electric cars and more foot and cycle paths in New Delhi.