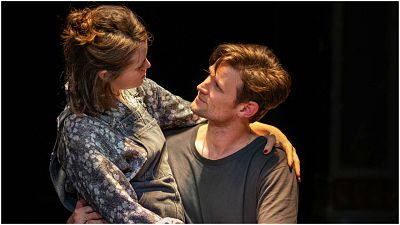 In August this year, the news of the Amazon burning spread like wildfire across the globe. Often referred to as ‘the lungs of the planet’, it is the world’s largest tropical rainforest and acts as a regulator for the dangerous levels of CO2 in our atmosphere. With the Amazon on fire at the forefront of my mind, ‘Lungs’ felt an apt title for a play addressing the reality of climate change, but from a perspective we could all relate to.

Duncan Macmillan’s play at The Old Vic theatre was a workshop in intimacy and a masterful performance by two actors whose well-charted chemistry is undeniable. At ease with each other, having co-starred in award-winning Netflix series The Crown, Claire Foy and Matt Smith’s relationship as a struggling couple was impossible not to identify with. The pair battle with the question of whether or not to have a baby in this climate, a time when having a child is said to generate “10,000 tons of CO2” over their lifespan. Foy begrudgingly compares this to “giving birth to the Eiffel Tower” in one instance of the sharp, quick-witted humour that defines her character.

Lungs is the depiction of modern love in an era of uncertainty and fear. Conversations about relationships are intrinsically linked with environmental questions, while mundane bickering about shopping in IKEA quickly escalates into existential angst. The question of whether to conceive is at the helm of their interactions, as Foy barely stops for breath verbalising all her insecurities about becoming a mother. Meanwhile, Smith is the archetypal masculine character, silent and overwhelmed by the complexity of her analysis.

Their characters, unnamed, are as passionate as they are cerebral, with a dialogue that is barely interrupted. I found myself sucked into the stream of consciousness passing back and forth between the couple, unaware of the 1hr20 running time go by. So much so, I barely even noticed there was no interval, a testament to the raw scenes playing out in front of me.

Read More | The Amazon rainforest is on fire, what can you do about it?

Rob Howell’s set is barely there, minimal except for a nod to modern eco-solutions with solar panels lining the floor. Both characters were dressed casually, Foy in dungarees and both of them in trainers, again highlighting the dialogue as the central focus to the viewer. Scenes changes were seamless, drawing no attention to the shift in circumstance - the actors used imaginary props when necessary. This merely forced us to create the various settings, from spooning in bed at night to dancing at a nightclub, using only our imaginations.

For me, the relationship in Lungs is microcosmic, reflecting the two sides we all possess when trying to make sense of environmental issues today. Foy’s heart-breaking miscarriage at the end almost felt like the loss of the Earth as we know it – something we are all trying to face. But the lovers find each other again, after suffering the loss, and manage to rekindle their love in the final, mesmerising scene. It strikes me that Macmillan couldn’t bear to end on a dissonance, without reuniting the couple and restoring hope in the viewer. All is not lost, perhaps.

Throughout, Smith and Foy seemed to represent the internal battle in each of us; on one hand, wanting to carry on with life as normal, but on the other, struggling to cope with the gravity of the climate emergency. Often laugh-out-loud funny and simultaneously morbid, Lungs was a crash course in dealing with eco-anxiety in 2019.