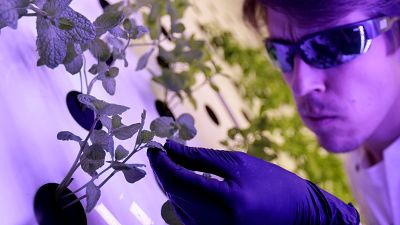 A university in Prague is growing food in adverse conditions likely to survive on Mars.

The red planet maintains an extreme climate, with the highest temperatures hovering around -25° C and lows of down to -102° C according to NASA. Water exists on Mars in very small quantities and usually in ice form, meaning it is implausible that plants would be able to grow there conventionally.

In an experiment at Czech University of Life Sciences, agricultural scientists are growing mustard plants and strawberries using aeroponics, to see if they can survive without water.

Calling it the “Marsonaut” experiment, lead scientist Jan Lukacevic has already achieved growth of mustard plants, salad leaves, radishes and herbs like basil and mint. The team tested out the conditions by adjusting light and temperature in a controlled environment to see what would work best. Last week, they ate from their first harvest and hope to grow strawberries soon in the same way.

Lukacevic describes the taste of his produce as “wonderful”, putting the success down to the fact that the plants were supplied with “bespoke nutrients.”

What is Aeroponic farming?

Aeroponics is the process of growing plants in the air, without using soil and with limited water use. The alternative growing technique is closely linked to Hydroponics, where plants are grown in sand, gravel, or liquid, often under LED-lighting.

Aero/Hydroponics is often used in vertical farming, a sustainable alternative to grow crops in urban spaces that are overcrowded. For instance, earlier this year, Singapore began vertical farming shrimp, in order to curb a food crisis.

The Aeroponic growing method uses 95% less water than normal plant cultivation. As such, growing food in this way may mean that crops would survive the hostile weather conditions on Mars.

Is planting food in this way sustainable?

The main benefits of Aeroponic farming include using less water and saving space. Therefore, it is argued that this method could “boost agricultural yields in areas hit by urbanisation and climate change.”

However, the biggest criticism the process faces is that plants are fed with artificial nutrients, meaning they don’t have access to the microbiology of healthy soil. Patrick Holden is the chief executive of the Sustainable Food Trust and has “long-standing doubts as to the sustainability” of such methods.

Speaking to Euronews Living, Holden equates organic vs hydroponic farming to feeding human patients normally as opposed to through an intravenous solution. In this parallel, the vital role of the soil is compared to that of the stomach in the body, as both can “break down organic matter and complete nutrient cycles”. The role of soil is as important as the role of the stomach, in other words.

According to the Sustainable Food Trust, Hydroponic farming methods “cannot provide all of the micronutrients and other things that are associated with organic food production.” Therefore, for CEO Holden, the “widespread advocacy of hydroponics is misplaced.”