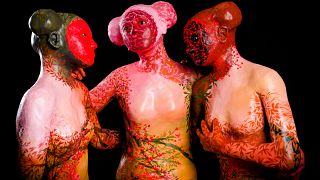 Hiding out in Thetford Forest this Autumn, Lisa Wright and Tom Piper’s Future Forest lies waiting to be found.

Two years in the making, this large scale installation commemorates the UK Forestry Commission’s centenary with a sculpture trail on the Suffolk Norfolk border. The aim is to encourage awareness around environmental safeguarding.

'Future Forest' is arresting and didactic, drawing attention to the importance and sanctity of trees.

While artist, Lisa Wright, is responsible for the series of life-size sculptures in Future Forest, designer, Tom Piper, constructed the surrounding settings. Famed for his extraordinary Blood Swept Lands and Seas of Red back in 2014, this designer is well versed in the importance of creating large scale works that can bring people together.

His collaboration with Wright is similar in its aim to encourage people to look at the forest in a different way, creating something that is both intellectually and physically accessible to all.

The mile-long sculpture trail is comprised of six individual installations, containing ten sculptures. Some are more concealed, others are strikingly visible and placed on grand open stages, inviting the viewer to interact with the pieces and question their presence. The classical, nymph-like nude sculptures bear the floral markings of the forest, dressed in foliage and bright colours, which stand out playfully against the natural surroundings.

Instead of casting in plastic, Wright's works are sculpted from bio-resins, which are toxicologically safe and formed from renewable resources.

The Janus facing artwork encourages reflection on the past, present and future of the forests. The life-size sculptures are influenced by characters with ancient classical heritage, deeply entrenched in literature and art. With Venus and The Three Graces amongst them, they appear before the viewer watchful, adding a sense of nobility to the installation’s message. The life-like glass eyes of the youthful figures establish a human connection and draw the spectator in, alerting and aligning them with the inherited responsibility they now bear for the trees across the nation.

"This sculpture trail will stop visitors to Thetford Forest in their tracks, both for the beauty of the figures and the drama the installations bring to the landscape," comments PK Khaira-Creswell, the director of the Forestry Commission’s centenary programme.

In a statement released this September, the Commission directly responded to the climate emergency. It urged the nation to protect and restore our trees because trees have the power to reverse the current trend of rising greenhouse gas emissions from burning fossil fuels. Research carried out by the Crowther Lab at ETH Zürich, suggests that we could reduce CO2 in the atmosphere up to 25% if we were to plant new trees on the 0.9 billion hectares of land they deem suitable across the globe.

These would be "levels last seen almost a century ago," states Professor Tom Crowther. "This new quantitative evaluation shows forest restoration isn’t just one of our climate change solutions, it is overwhelmingly the top one.”

Be sure to visit Future Forest before it closes in May 2020.