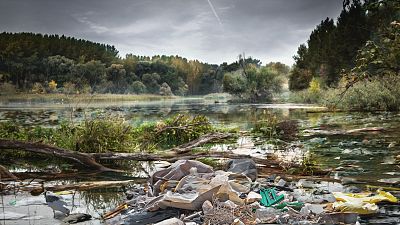 Dutch non-profit The Ocean Cleanup has released a robot that will clean up 80% of the world's rivers within five years.

Following its project removing plastic from the oceans, The Ocean Cleanup organisation came up with another idea to tackle the source of the plastic flowing into the sea. The technology: a solar-powered floating device that scoops up plastic waste floating on the water's surface, and guides it onto a conveyor belt and into a bin to be recycled.

Even though the technology has just been unveiled in the Netherlands, the name "Interceptor" has already earned a formidable reputation as a defender of the environment. It plucks 30 tonnes of rubbish a day from the Klang River in Malaysia, where one of the first vessels has been working for two months.

Read more | How will Honda go all-electric within three years?

It is estimated that some 5 trillion pieces of plastic debris are floating on the oceans right now, according to National Geographic.

Founder of The Ocean Cleanup organisation Boyan Slat believes 1,000 rivers around the world are responsible for some 80% of plastic pouring into our oceans. Hence his goal: to clean all of them in the next 5 years. He appeals for support from governments as well as businesses to have some of the operations funded - covering some of the cost of the machines, which cost €700,000 each.

What is The Ocean Cleanup?

Twenty-five-year-old university dropout Boyan Slat founded the Netherlands-based NGO in 2014. It focuses on engineering, with a the aim of benefiting the environment.

Slat has been concerned about plastic pollution since high school and that led him eventually giving up his aerospace engineering studies at the Delft University of Technology, and work on developing advanced technologies in order to clean the world's oceans. Its first prototype to clean the oceans faced technical problems and after long months of testing, the organisation reported in October that their technology is successfully working on the Great Pacific Garbage Patch situated between Hawaii and California.

Hit play on the video at top of the article for more.