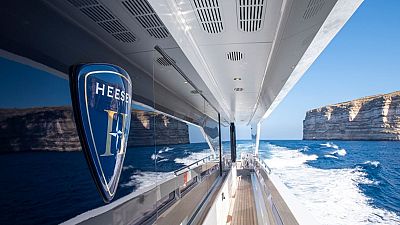 Once every millennium (or so) journalists are invited to spend a day on a superyacht to really ‘experience’ it and write about how to charter. The stars must be aligned though, as a vast array of people, the owner being the first, must be willing to let you get a glimpse of this exclusive and luxurious lifestyle. I was lucky enough to be welcomed on board the 45-metre long Amore Mio (My Love) and set sail on the Mediterranean Sea for the day.

Of course, the location was hardly in Swansea or Calais - but the glorious sunlit Malta. In case you’re not familiar, Malta is a South European island-country located in the Mediterranean. It is home to a gorgeous fortified city with a gory history, renowned finance circles, popular beaches and some questionable nightlife. Some call it the ‘Hollywood on the Med’, which certainly fits the bill of this particular journey I was about to embark on.

Watching Valletta, the tiny capital city, disappear in the distance in the early hours of the morning, was a sight to behold. No matter how many times I pointed my iPhone camera at the sumptuous décor for a photo, not a single picture did justice to the incredible cityscape bathed in the gold sunrise. Tragically bombed during World War II and partly destroyed, the city was then recognised as a World Heritage Site in 1980, which is just what it deserves.

Our serene cruise had begun, passing stretches of the Maltese coastline, hidden stone coves formed by the combined work of winds and sea salts, and the famous Saint Paul's Bay. The bay is named after the shipwreck of Saint Paul on his voyage from Caesarea to Rome, which laid the foundations for Christianity on the island. I found a particularly comfortable spot (there were many) on the main deck aft terrace and wrapped myself in a cosy blanket to admire the landscape in total peace.

A custom sports-yacht built in the Netherlands

From the said blanket to the crockery, the interior design by Cristiano Gatto to the jet skis and other ‘water toys’ available, (more on that later), everything was bespoke. The superyacht itself is custom, for crying out loud. Sitting down with Sara Gioanola, media director of Heesen Yachts, the shipyard behind the impressive monstrosity, I asked her more about this particular aspect of the transaction. “We are the only shipyard with our own in-house interior furniture studio. Usually the client comes with its own designer, or in the case of a boat being built on speculation, they give their brief to our designer," she explained.

“At the moment it’s all about platforms and balconies, or loggias which are very on trend,” she added. Heesen once built a complex rainforest waterfall situation on top of an outdoor swimming-pool, where the ceiling could be turned into your own landscape cinema on the sea. A pretty cool twist on your Netflix binge-watching routine, I must say. In fact, powerful access to the Internet, either for work or pleasure, has become the number one priority for any superyacht owner and is now part and parcel of every request.

We arrived at the destination later on that morning. Not being aware there was a destination in the first place, I stretched out of my contemplative state to join the captain and crew down on the swimming platform. Now was the time to show us what it’s really like to own a superyacht. They opened up a garage where a collection of sophisticated watersports equipment awaited us. From jet skis to sea bobs, waterslides, a six metre Boesch mahogany tender and even a flyboard, their cupboard full of nautical games would outdo any water park.

And so we swam and frolicked in the crystal clear waters of this secluded creek, the echoes of our own laughter and outpour of joy as our only company. Complete privacy is the ultimate luxury, and so is a freshly prepared lunch. Amore Mio comes with its own crew and private Chef who creates every dish from scratch, on a daily basis, in the yacht kitchen. Quite frankly, I was impressed to see an assortment of delicious seafood salads and other tasty nibbles magically appear on the sun deck, as soon as we had finished our water activities.

Sitting next to the captain, I asked how he would define his position on the yacht besides sailing it from point A to point B: “Our job is to make dreams happen. We never say no. We work around the owner’s desires,” he joked. “Even if that means filling a swimming pool with Champagne!” he laughed.

Nowadays, it’s extremely rare to own a superyacht, especially one of Heesen’s calibre. The Dutch company is known for its quality and reliability aiming primarily at wealthy individuals who know their way around boats. As a matter of fact, to own one you’d need €35 million minimum, to start with, and spend 10% of that amount every year just taking care of it. Most celebrities charter superyachts for a fraction of the price during hot season. Like a home on water, Amore Mio includes all the amenities you’d find in the most luxurious of villas such as a proper reception room with bespoke interior design.

A good example is the use of open grain ‘flamed American walnut veneers’ in book-matched (marble) style with the furniture and table tops. All the doors have an inlaid, sculpted and lacquered panel and the stone used on board comes from the same block of breccia perlato, a limestone that incorporates many organic elements such as shells and other fossils. The fabrics are by Loro Piana who developed a special textile for marine use that is used throughout the yacht.

Heading back to the Valetta marina at sunset, we were invited to step inside the captain control room. There, we witnessed how this 45-metre long, wildly expensive piece of naval transportation, could reverse smoothly back into the dock, steering with military precision and without a single scratch. Fun, and not stressful in the slightest... Good thing I was in the owner’s shoes for the day, and not in the captain’s seat.

Heesen Yachts are leaders in sustainability. The company’s 50m Home is the world’s first hybrid yacht with a fast displacement hull form. Home won the RINA green award by HSH Prince Albert of Monaco at Monaco Yacht Show for ‘most ecologically friendly superyacht’. Investing in smart technology is part of Heesen’s contribution to creating a more sustainable yachting industry.