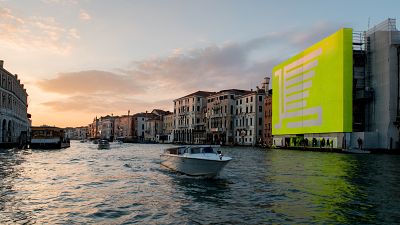 Venice, a city rich in history and culture, from grabbing your morning coffee at century-old Cafe Florian to enjoying a spritz at sundown. While those in London are stood on a packed tube like sardines, the Venetian locals are out catching them for a fresh dinner to the sound of opera.

However every other year, between the months of May and November, the city awakens tenfold, where art enthusiasts flock (or rather boat in) to experience what puts the floating destination on the map: La Biennale di Venezia. Dating back as far as 1895, the colossal event today leads the way as the godfather of cultural installations in the world.

I made my way to the art fair’s purposely-built pavilion on a hot August morning, that to my amazement is located in the centre of sprawling gardens, specifically the Giardini della Biennale. I was under the impression unless you’re surrounded by water, you are no longer in Venice, alas this was just the start of more surprises to come.

Relaxing serenely in the centre of the giardini with the sound of crickets in the background, was Alessandro Gallo, creative director of the Venezia Pavilion, and founder of fashion brand Golden Goose. He, along with Giovanna Zabotti, the pavilion’s curator have brought together an art installation from different corners of the world that maintains the same core - the culture and eternity of Venice. I was curious to see what it is that brings so many like-minded internationals to this very spot. After arriving, I was swiftly taken under his team’s wing into the exhibition.

This year a group of seven international artists with strong creative ties to the Italian art scene were selected for the 58th International Art Exhibition. The result? A fully immersive experience for all the senses encompassing religion and spirituality. Collectively each artist displays a response to their individual experiences of the city.

The installation begins with Roman artist Sidival Fila’s ‘Golgotha’, comprised of worn linens composed into eight elements. One representing a sculpture of the Holy Cross, while the remaining seven enlighten us spiritually. Without relating to a specific religion, Sidival wanted to speak to the heart of the people who visit.

The most exciting part of the installation for me was Fabio Viale’s representation of Venice’s renowned wooden stakes. The master behind the masterpiece doesn’t simply take wood and repurpose it, rather he uses marble. A real feast for the eyes and hands, because no matter how much I tried to believe it was marble, it looked and felt like wood. It's no wonder Viale is known as one of the world's best sculptors. In collaboration with London-based art group Plastique Fantastique the artist’s blown-up installation takes you on a ‘spiritual journey through Venice’. Comprised of calm green-hued waters and infused with the smells of the city by Master Perfumer Lorenzo Dante Ferro, the idea is for the viewer to feel as immersed as they would in the city.

With turbulent times imminent on our planet, Venetians try their utmost to maintain the city’s beauty. Over the years, it has been faced with contamination, rising water levels and an influx of nomadic tourists. So much so, Italian filmmaker Ferzan Ozpetek has produced a powerful film named ‘Venetika’ to showcase a city that reflects, immerses and resurfaces in water. The filmmaker so beautifully displays a mysterious woman (actress Kasia Smutniak) submerged in water - at a certain moment, the female figure disperses into extraordinary shapes, intricate paintings and dreamy architecture. As the images kaleidoscope, the viewer understands the vision reflected in water represents the city’s turmoil, yet turmoil that never compromises its beauty.

Maintaining a theme of contamination in Venice, Gallo’s final and viral piece didn’t just localise itself to the pavilion, rather across the whole city. Painted in fluorescent yellow the exclusive Golden Goose ‘Stardan’ sneaker proposes the idea that those who choose to wear them become an evolving part of the artwork just by simply walking through the city.

If you were in Venice during the month of May you might have seen fluro-graphics and QR codes applied to signs, posters, flags and public transport. German graphic designers Bureau Mirko Borsche crafted a centrepiece to encapsulate the Lion of St. Mark - a strong symbol of Venice. A second geometric design was made of vertical bars to convey the city’s omnipresent stakes, while the neon-yellow poses the question: does this represent contamination in the city over the years?

La Biennale di Venezia will be on from now until 24th November.

This year's Venice Biennale asks "how will we live together?"