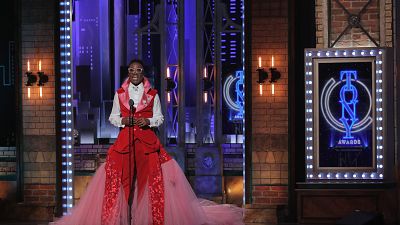 Last night was perhaps the biggest night in theatre, as the 73rd Tony Awards took place in Radio City Music Hall, New York. But who walked away with the awards? A folk-opera musical based on the ancient Greek myth of Orpheus and Eurydice, ‘Hadestown’, won a staggering eight awards, including Best Musical, Best Original Score and Best Performance by an Actor in a Featured role. In addition, ‘The Ferryman’ won Best Play for its depiction of the family of a former IRA activist living in rural Northern Ireland and ‘Rodgers & Hammerstein’s Oklahoma!’ won Best Revival of a Musical, showcasing love triangles and female empowerment. While, Elaine May won an award for her memorable performance in ‘The Waverly Gallery’, next to Bryan Cranston who won the male equivalent for his role in the play ‘Network’.

Evidently, 2019 has been a powerful year in world of stage and theatre, but did any of the attendees steal the show in sustainable style?

Actor Billy Porter dazzled the red carpet once again - but this time with a pair of old curtains! The Kinky Boots star’s Celestino Couture gown made a strong statement about sustainability, appearing in upcycled curtains from the Al Hirshfield Theatre. Porter’s design team explain:

“Everything under the train is tulle, but the rest of the garment is the curtain.”

Porter’s outfit ticks more than one sustainable box, as designer Celestino encrusted the gown in 30,000 Swarovski crystals, a brand which recently won FIT’s Social Impact and Sustainability Award. His custom made shoes were also embellished with the environmentally-friendly crystals.

But what happened to the rest of the show curtain and the outfit once Porter wore it for the evening? The rest of the fabric will be repurposed for scenery bags and the outfit is to be displayed in various museums. It’s worth noting that Billy Porter’s look not only championed sustainable fashion, it also had a political statement to make. The outfit was explicitly pro-choice, Stylist Sam Ratelle explains:

“The sides of the dress are fallopian tubes and all of the embroidery on the back of the train is resembling a uterus—done in an artistic way. Billy is supposed to be what women could be and who they are.”

Bryan Cranston appeared elegantly dressed in a spectrum of blue at this year’s Tony Awards, in the iconic fashion label, Prada. The Prada Group, who recently announced a fur ban, is known, of late, for its sustainability credentials. The brand is “committed to reducing the environmental impact of its activities” through initiatives such as the reduction of land consumption, energy efficiency, use of renewable energy and a reduction of waste. In the case of Dearden and Cranston, both awards were won and fashion brands with sustainability in mind were chosen. Bravo!

As a whole, the Tony red carpet attendees did not flaunt an abundance of sustainable pieces this year, but hopefully looks, such as Billy Porter’s reworked curtains, will serve as an inspiration for 2020. Already this year, we’ve seen similar sustainable efforts from the British actress who wore a bin bag to the BAFTAs, Eileen Fisher picking up the Positive Change award at the CFDAs and the Victoria’s Secret Angel who wore 100% sustainable Dior to the Met Gala.