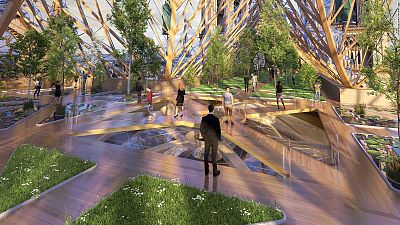 The world is mourning the devastating loss of Paris’ beloved Notre Dame, after the blaze that tore through the cathedral only last month, on the 15th April. While the cathedral’s beehives managed to survive, the roof didn’t fare as well and was almost completely demolished by the fire.

Ever since the tragedy, there has been ardent debate over how best to restore the ancient cathedral, with proposals hailing from architects far and wide. Brazil based architect Alexandre Fantozzi has proposed to rebuild the roof using stained glass, to give the structure a lighter, brighter feeling while staying true to the original Gothic style.

Stockholm based firm Ulf Mejergren Architects, who describe themselves as “adventurous,” are even suggesting a swimming pool roof to replace the highly flammable medieval timber. Certainly a fun idea, but perhaps not what the French historians have in mind?

One Parisian architectural firm is proposing to lead the charge by turning Notre Dame into a modernised, eco-cathedral complete with a solar powered roof and urban farm. Is there perhaps no better way to commemorate a loss than by transforming the remains into something sustainable that will benefit the environment?

The architect proposing such a leap is Vincent Callebaut, who wants to project the building towards a “desirable future” by advocating a complete rebirth of the cathedral. As such, the project is called Palingenesis, meaning ‘regeneration’ in Greek and would involve the construction of a strong oak frame and carbon fibre slats, to minimise the amount of construction materials and maximise space for light to shine through the solar glass roof.

Supposedly, ‘photovoltaic crystals’ in the roof containing carbon, hydrogen, nitrogen and oxygen would absorb light and transform it into power to be stored in hydrogen fuel cells. So, crucially, the new Notre Dame Cathedral would end up producing more energy than it consumes, and therefore be energy-positive.

“Through energetic solidarity with the body of the historic monument, the contemporary, three-dimensional Gothic stained glass graft produces all the electricity, heat and passive ventilation that the cathedral might require.”

Describing the project as a representing the ‘symbiotic relationship between humans and nature’, the company went on to say,

"Thus, we seek to present a transcendent project, a symbol of a resilient and ecological future that offers the city Paris a set of solutions inspired by biomimicry, defined here as a common ethic for a fairer symbiotic relationship between humans and nature.”