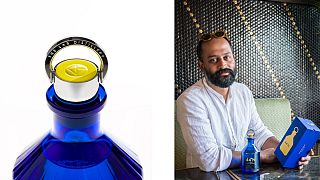 On the Côte d’Azur, in the hills north of Cannes, lies the town of Grasse. Since the end of the 18th Century, it’s been seen as integral to the perfume industry - “la capitale mondiale des parfums”, as the French so eloquently put it.

Perfume houses like Galimard, Molinard and Fragonard are still headquartered in the town and have given in to the temptation of the omnipresent ‘factory tour’, but remain gorgeous mementos of a France gone by. There is, however, a new industry growing in Grasse that takes some of its inspiration from the old perfumeries.

A distillery sourcing its botanicals locally

Comte de Grasse, founded in 2017, has just released its first spirit, a particularly futuristic gin named 44°N in honour of the location of its factory, formerly one of the town’s perfumeries and producers of raw materials for perfumers since 1820. The area, perfect over so many years for sourcing the very best perfume ingredients also lends itself to a distillery sourcing its botanicals: local cade, mimosa, jasmine, immortelle, lavender and rose centifolia are all within plucking distance.

Tradition and romanticism are all well and good, but they get you nowhere in the growing world of sustainability: beautiful design and romantic backstory are no longer enough in an industry crying out for eco innovation. It’s here that 44°N has managed to combine the perfume world with the future of spirit distillation.

Comte de Grasse’s master scientist Marie-Anne Contamin has worked with the University of Nice and Sophia Antipolis Research Lab to introduce three incredibly complex-sounding processes to gin distillation, to improve both the spirit’s sustainable credentials and its taste. This trio of methods is codenamed Grasse HYPRX, for ease in conversation and presumably also to make the distillery sound more exciting than anything Elon Musk has come up with.

The first step, ultrasonic maceration, creates microscopic bubbles that burst and de-structure the cells of the botanicals present, extracting flavour and character. The low-energy process enables a quick and high extraction rate, which in turn gets the best tasting notes from each ingredient.

The resulting pulp - or macerate - is then moved onto the vacuum distillation stage. Further flavours are extracted from the ingredients at low pressure and temperature, in order to adequately concentrate the alcohol level while preserving any fragile notes and creating a more energy efficient process.

The final step is the most Space Age in technique and name. CO2 superficial extraction, in layman’s terms, is the process of pumping high pressure CO2 plasma through each botanical - with the pressure tailored to the molecular structure of each - to extract the exact flavours wanted for the gin.

While the steps are familiar - maceration, extraction, distillation - the intricacy of the processes has reached the next level of technical prowess, using significantly less energy and fewer natural resources than traditional gin production, and seeming more akin to the exacting standards of perfume creation.

Replacing the perfume industry is vital for Grasse, the local community having seen years of decline due to many of the famed perfume manufacturers moving to more industrial areas. To this end, before the botanicals even get to the distillery, they’re hand-picked by Renouer, a cooperative dedicated to rebuilding the economic independence of the area.

With one final homage to Grasse’s past, 44°N’s bottle is a Bleu Klein beauty, taken straight from a perfume bottle designer’s handbook. For the local area, perfume remains an important cultural and financial aspect of life, and with Comte de Grasse, this looks set to continue for some time to come.