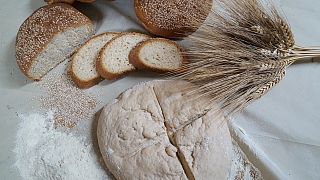 Let's admit it: most mass-produced bread today are tasteless, chewy, unhealthy because packed with nasty additives. It's getting harder and harder to find those home-made, fresh-from-the-oven loaves our grannies baked for us once or twice when we were kids. However, in central Sicily, it's a daily treat.

Local bakeries and housewives are renown for making a special, healthy black bread called Tumminia - easier to devour than pronounce - which is turning into an élite, wanted food exported across the world.

It is made with ancient Saracen wheat, that grows in a vast, fertile patch of land dubbed ‘Italy's Barn’, dotted with old mills, pink salines, Greek temples and Arab-looking dwellings and chapels. Tumminia is the symbol of Sicily's exotic, cultural melting pot.

Originally grown in Mesopotamia, along with the banks of the Euphrates and Tigris river, it was imported by Phoenician and Saracen conquerors who passed down the farming know-how to locals, teaching them the secrets of making a divine flour.

A highly nutritional and digestive bread

Tumminia bread is the most delicious I've tasted in my whole life. Before you pop a morsel into the mouth, the raisin-like scent is overwhelming. Sweet and soft, but at the same time slightly dense with a firm crumb, it has a flowery and almond-like flavour that lingers on taste buds and prepares for lavish meals. Once you've tried it, you'll probably dine exclusively on Tumminia loaves.

Highly nutritional and digestive, the special kind of flour makes it suitable also to celiacs and people who have a hard time digesting carbohydrates. "Tumminia requires no pesticides, fertilizers and herbicides as the wheat plant is over 2 meters tall and grows far above the soil, so there's no contamination of any kind from the infesting weeds", explains Tumminia producer Filippo Drago.

Production is exclusively biological, meaning no chemical substances nor manure are used. It's not 'doped' wheat, though one would think so given its sublime taste and the way it melts on the tongue. Another smart eco-friendly factor is the dimension and type of cultivation.

"We follow the so-called rotation agrarian techniques to avoid exploiting the land too much. Tumminia is not an aggressive production as the wheat is grown and picked once every two years across a vast area of roughly 400,000 hectares", says Drago.

That allows the fields to breathe and regenerate by alternating between Tumminia and honey production, for example.

To give the wheat a silky texture and best preserve its precious qualities, it is crushed exclusively on ancient mills made of natural stone, dating back to the 1700s. As I let the flour sieve through my open hand, I can't help comparing it to a "grain juice". Carb addicts will be delighted: other than bread, you can indulge in Tumminia pizza, Grissini breadsticks, biscuits and even short pasta shaped like a screwdriver called Busiate.

Yet, up until a few years ago, nobody knew what Tumminia was, it had fallen into oblivion. In the early 1900s, what with emigration flows and new farming techniques, locals had ditched production.

Tumminia wheat thus ended up being showcased for more than 80 years inside museums, as a locked-up relic.

Fans as far as Australia and the US

Some 15 years ago, young generations of farmers, pushed by the desire to revive old traditions and recipes, decided to recover and re-plant that exquisite lost, ancient Saracen wheat variety. They also restyled old mills, where they now welcome guests to taste the heavenly loaves.

Thanks to their crusade Tumminia went from being a poor, low-base bread eaten by peasant and shepherd families (the only food available during wartime), to a wanted, fashionable speciality that pays homage to both health and the environment.

No wonder Tumminia, which today boasts fans as far as Australia and the US, is a treat for real bread connoisseurs. Recipes featuring this unique wheat passed down from grannies to young girls will amaze the finest of palates. The local signature dish is by far Tumminia Busiate pasta with qualeddu, a wild large leaf yellow flower, sausages and (Tumminia) bread crumbs.