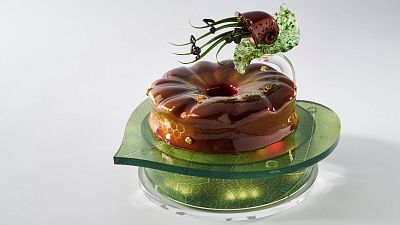 Every two years the young pastry talents of the world meet in Lyon, France, also known as 'the capital of gastronomy'. The World Pastry Cup, the Coupe du Monde de la Pâtisserie brought together the chefs from four continents; Africa, Asia, Latin America and Europe. Eventually, 21 teams have qualified for the final this year, which took place on the 27th and 28th of January.

The event was celebrating its 30th anniversary this year and presented an unusual challenge for the contestants. For the first time in the history of the pastry contest, the dessert presented on a plate had to be 100% vegan, in other words, the chefs were not allowed to use any product of animal origin. The imposed themes of the creations were nature, flora and fauna.

The chefs needed all their creativity to bring about their breathtaking creations without butter, egg and cream. The winner of this year's competition was Malaysia, Japan managed to bag the second place while Italy came in third.

Click on the video to learn more about the world's best vegan creations.