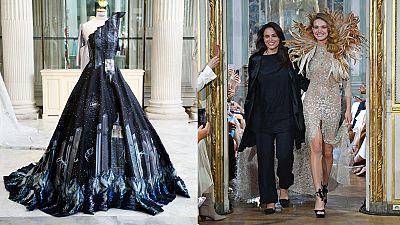 As the birthplace of Haute Couture, Paris is the only city in the world that hosts the most prestigious fashion week on the calendar. Paris Haute Couture Week attracts a global fashion community, drawing them all to the fashion capital in early July. While the art of couture is traditionally a French craft, international designers are globalizing the art form by adding their own techniques and methods, influenced by their cultural roots. Last week, Living it was on the scene and on the runways, discovering the international couturiers that are not only enriching the French fashion tradition, but also revitalizing ancient traditions from their homelands. Meet them all below:

Veteran couturier Yumi Katsura  has left her mark on Paris runways through her signature approach in merging French savoir-faire with traditional Japanese techniques, celebrating the friendship that unites both countries.

This season, Katsura also implements the black and white checkerboard pattern (also known as the Ichimatsu Moyo motif), which brings a jovial, youthful take on her otherwise soulful designs. Once again, Katsura reaffirms her role as the Japanese Ambassador of Haute Couture.

Her piece, entitled ‘Adagio Grace’, is most reminiscent of these roots, an evening coat with 3D hand-embroidered organza triangles filled with crystals and sheer panels. Also remarkable are details of origami cut appliques, a feather-cut biker jacket in the lightest leather tinted in rose gold, and cut out shoulders featuring individually embroidered ostrich feathers. Each meticulously crafted piece starts off as an oil painting by Gyunel, which is then transformed into fashion designs.

Raised in China and educated in Paris, Liu Chao is a young Chinese designer who is a passionate and ardent student of traditional craftsmanship in both France and China.

Despite the speed of the modern world, Chao is dedicated to the slow mastery of both French and Chinese embroidery. Merging his art history background at the Sorbonne and his embroidery training at Ecole Lesage with his knowledge of Chinese embroidery from Guang Zhou, Chao is set to redefine and elevate what ‘Made in China’ can mean.

For this season’s collection, he draws inspiration from Mongolia’s rites, culture, and philosophy. According to the designer, while Western comfort is absent in Mongolia, human-centered values remain important: respect among all, harmony between man and nature, and spiritual faith. Transforming the Mongolian costume, the young designer explores a new sensuality while acknowledging a life lived harmoniously.

In collaboration with artist Jenny Kee, the collection, entitled “Step Into Paradise”, featured a glamorous parade of sprites and nymphets embodying the heart of Australia’s Ozotica. Inspired by the wilderness, the flamboyant collection featured multicolor patchwork dresses, feather headpieces in neon colors, Australian vintage postcard prints, and more. Made by hand by global artisans from the UK, Australia, and America, the collection demonstrates handiwork made from delicate embroideries and appliques, and fabric salvaged from Jenny Kee’s personal vintage collection. The effervescence of the Australian free spirit was center stage at the show.

As the head of the oldest fashion house in Greece, Celia Kritharioti continues to helm the brand into the modern world through her dedication to feminine strength and beauty.

Established in Athens in 1906, the house produces handmade creations in fine materials and hand-embroidered details. For this season, she dedicates the show to her mother, who loved the color black, pearls, and Paris. As an homage to her mother, she focuses on black and gold in lush velvet, lace, feathers, and pearls, transporting viewers back in time to an old world set on a winter evening at the Opera (or perhaps a couture show with her mother). Kritharioti introduces cut-out details in this collection, a traditionally Greek technique in dressmaking. With bold shoulders accented with feathers, the designer channels feminine power and grace.