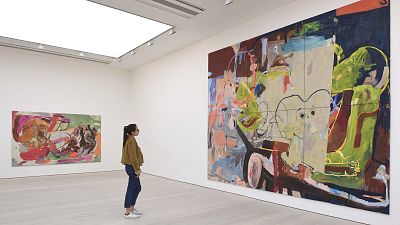 At first glance, the artwork featured in the latest exhibition from London’s famed Saatchi Gallery, appear to have very little in common.

But a closer look at the paintings, sculptures, photographs, collages and films on display in the Known Unknowns show reveals quite a few similarities.

The exhibition includes work from 17 different contemporary artists - all born between 1966 and 1990 - who are mostly unknown to the wider public but known and respected in the art world.

“The diversity of the artists’ practices show a willingness and ambition to experiment, to stretch boundaries - if there is any commonality between them, it is this,” Philly Adams, senior director at Saatchi Gallery told Euronews.

Painter Tom Anholt, for instance, likes to restrict himself through a colour palette. “To put more and more constraint on myself early on in the process allows more creation,” the Briton, now living in Berlin, explained to Euronews.

In his “Through the Generations” painting, in which different scenes from one person’s history are superimposed, he nearly exclusively worked with the colour green.

“It’s quite a difficult colour to make work,” especially the acid green touch in the bottom-right corner, “which you’re told to avoid.”

For her part, Saskia Olde Wolbers produces videos for which she builds miniature architectural sets - a process that can take years - before filming them underwater.

“I really like it when the outcome of the visuals are slightly unknown,” she told Euronews.

In “Interloper”, she tells the story of a man who has an out-of-body experience while on an operating table following a car crash. But all is not as it seems, as the patient - suffering from mental illness and self-delusion - is “an unreliable narrator.”

Another common thread in the exhibition is the focus on very modern topics: mainly how the digital world is disrupting the way we consume information, see the world and ourselves.

Through his pieces American artist Chris Hood delves into “how we are affected by contemporary digital image culture,” Adams explained. Hood, who applies his broad, swirling brushstrokes to the reverse of the canvases allowing the paint to bleed through, infused his work with references to American counter-culture and social media.

Meanwhile, Theo Ellison’s seductive photography in which he plays on desire and revulsion “forces the viewer to confront the way we perceive and consumer imagery,” according to Adams.

In one of the 27-year-old’s photographs, a naked woman lies in bed upon a deep royal blue sheet, staged in a way reminiscent of the old masters’ paintings. Her genitalia, however, is obscured by a large lobster.

Elsewhere, Alida Cervantes’ work - created using paint and collaged photos of dolls - explores and reimagines the power relations across race, class and gender, while paintings from the late Tamuna Sirbildaze tackle how the human body, particularly the female form, is represented in contemporary society.

“Her figures are distinctly unromanticised, showing female bodily functions and sexual acts in a highly raw and unflinching way that goes against conventional notions of femininity,” stressed Adams.

The curator described the large, colourful paintings from the Georgian painter - who died in 2016 at the age 45 - as “quite punk, and unreserved emotionally.”

“They feel fresh and should be celebrated,” he concluded.

Reviving the traditional art of ceramics in Georgia