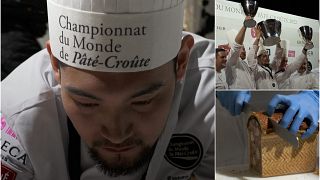 As millions of people will be on the move this week to spend precious time with their loved ones for Christmas we've been looking at some special items you can use to impress your family and friends!

For those seeking culinary delights, let's start by getting some inspiration from the world's best chefs who recently gathered in Lyon, France's gastronomic capital for the 13th edition of the World Pie championship.

Now, pies are traditional British fare at any time of year, but our fancy French cousins perhaps do like to make a bit more of a fuss over such matters. It also seems that an increasing number of other countries are also concerned with what's between their crusts.

Japan's Ryutaro Shiomi from the Kobe Kinato restaurant in Hyogo was crowned the winner of the competition. He beat off home boy Jeremie Crauser from the Maison Crauser et Bello, while another Frenchman came third. Tony Capocci, from Epicerie des Fermes.

Christophe Marguin, one of the organisers and president of the Toques Blanches Lyonnaises says there are many different aspects to learning to how to bake a pie.

"For many years, it's a product that we haven't worked on, it's a very technical product. So we have to train, we have to pass on, it's important to show how it's done, to explain that the meat has to marinate, that making the jelly, cooking the paste, many things go into the final result, so there are many things to learn and in the training and in the passing on, it's really an ideal dish to explain to young people what every day cooking is like." says Marguin.

Shiomi's victory completes a hat-trick of world titles for the Japanese.

A French chef based in Tokyo Christoph Paucod was among the jury. He says that Japanese chefs have a great interest in French cuisine and work hard.

"The craze for pies is simply because the Japanese are perfectionists. They love the quality of their work. And they love French cuisine and the product. And I think that Japan today has fallen in love with the pie. They are not looking for distinction."

Also on the jury were Mathieu Viannay, chef of the Mère Brazier, 2 star, Davy Tissot, Bocuse d'or 2021 and chef of the restaurant Saisons, and Jean-Paul Pignol.