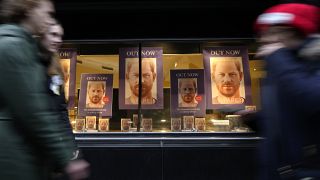 Pedestrians pass a display in the window of a book shop in London on Tuesday.   -   Copyright  Kirsty Wigglesworth/Copyright 2023 The AP. All rights reserved
By Euronews  with AP  •  Updated: 11/01/2023

Prince Harry's memoir “Spare″ has only been out in the UK for a day but it's already breaking book sales.

It's become the best-seller on Amazon’s UK site and on Amazon.com in the United States.

After weeks of hype and days of leaks, readers got a chance to judge Prince Harry’s book for themselves when it went on sale around the world on Tuesday after being made available, perhaps by accident, in Spain last week.

The book’s publisher said “Spare” sold 400,000 copies in the UK in all formats - hardback, e-book and audio - on its first day.

“As far as we know, the only books to have sold more in their first day are those starring the other Harry (Potter),” Transworld Penguin Random House managing director Larry Finlay said. The final Potter book, “Harry Potter and the Deathly Hallows,” sold more than 2.5 million copies on its first day of release, in 2007.

A few stores in Britain opened at midnight to sell copies to diehard royal devotees and the merely curious. Many said they wanted to form their own opinion of the book after days of snippets and debate on news sites and television.

“I’m excited just to hear about Prince Harry’s life from Prince Harry,” surveyor Sarah Nakana said, who bought the book at London’s Victoria station. There’s so much misinformation, disinformation about Harry and Meghan.”

The book’s myriad revelations and accusations have already been splashed across the media. In the ghostwritten memoir Harry, 38, recounts his grief at the death of his mother, Princess Diana, his disputes with brother Prince William and his frustration at the role of royal “spare” in the shadow of his elder sibling, who is heir to the British throne.

Buckingham Palace has not commented on any of the allegations, though royal allies have pushed back, largely anonymously.

Royal repair kit: How does one heal a family rift?