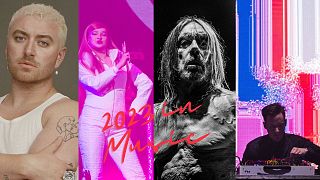 Buckle up, kids, because 2023 is going to be an exciting ride for music lovers.

Some of the most eagerly anticipated albums of the past few years are finally dropping, and some fan-favourites from way back when are also staging a comeback.

Here are some of the records we’re anxiously awaiting this year.

We all got a taste of what’s to come on British singer Sam Smith’s fourth studio album with the breakaway hit 'Unholy,' featuring German pop star Kim Petras. The queer anthem quickly catapulted Smith to the top of the charts, earning them a Grammy nomination and their first Billboard Hot 100 No. 1 single. Smith’s album will feature more collaborations with artists like Ed Sheeran, Jessie Reyez and Koffee.

Speaking of Petras, she’s also been teasing new music in 2023, riding off her recent viral success. Now the first openly trans woman to be nominated for a Grammy for 'Unholy,' Petras hasn’t released a studio album since 2019, and said her already-recorded third studio album was cancelled over the summer. Last month, she told a US radio station that she’s working on a new album, and said her latest single 'If Jesus Was a Rockstar' is a “perfect first look”.

Italian glam-rockers Måneskin made waves in Europe when they won the Eurovision song contest in 2021, but now they’ve set their sights on world domination. With a Best New Artist nomination under their belt at this year’s Grammys, the band announced their new album Rush is coming out at the end of January. Check out their single 'The Loneliest' for a taste.

To mark one year since Russia invaded Ukraine, Kyiv-based electronic artist Oleh Shpudeiko, who goes by Heinali, is releasing a tribute album to the city he loves. The 11 tracks feature field recordings from different parts of the besieged capital.

“After the Battle of Kyiv was over, many Kyivites noticed this strange feeling,” Shpudeiko said. “It was as if the city was alive, breathing. We wanted to hug it, to protect every inch of it from harm. I didn’t know how to do it back then. It took time and distance to figure it out, but ‘Kyiv Eternal’ is my hug”.

You can listen to the title track here.

The iconic godfather of punk Iggy Pop is releasing his – wait for it – 19th studio album early in January and he’s back to his rabble-rousing roots. Every Loser features Guns N' Roses' Duff McKagan and Red Hot Chili Peppers' Chad Smith among others. In a statement, Iggy Pop held no punches: “The players are guys I’ve known since they were kids and the music will beat the shit out of you”.

If John Cale and Iggy Pop weren’t enough to satisfy your rock nostalgia, British indie darling PJ Harvey said she’s also releasing new music this year. While the actual release date isn’t confirmed yet, Harvey told Rolling Stone her 10th studio album should come out this summer and that she’s “very pleased with it”. Her last album, The Hope Six Demolition Project, came out in 2016.

Jennifer Lopez - This is me… now - TBA

When Jennifer Lopez released This is me… then in 2002, it was peak Bennifer era. She and Ben Affleck basking in the sun on a yacht in her 'Jenny from the Block' music video became instantly iconic. More than 20 years later, Jen and Ben are married and Lopez is paying tribute to her past self with her first new album in nearly a decade: This is me… now. No release date has been announced yet, but Lopez promises “an emotionally raw and honest project, unlike any she has produced before”.

And finally, US rapper Cardi B says she’s dropping her hotly anticipated sophomore album this year, five years after her acclaimed debut Invasion of Privacy. The rapper said her indecisiveness has been holding her up, but that the record will be out sometime in 2023. “I have no choice,” she said. “I have to put it out.”

Love TV? Here are the top ten European series to watch in 2023