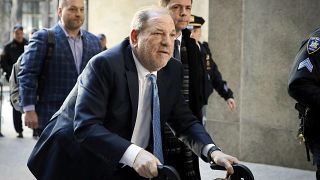 Harvey Weinstein faces a shorter prison sentence in California after a Los Angeles jury failed to reach a verdict on whether the disgraced mogul planned his attack on a woman he was convicted of raping.

Los Angeles Superior Court Judge Lisa Lench declared a mistrial on the issue after the panel reported it could not agree on special allegations that 70-year-old former producer planned his assault on a model-actor in 2013, and whether she was “particularly vulnerable.”

On Monday 19 December, after two weeks of deliberation, the Los Angeles jury convicted him of forcible rape, forcible oral copulation and sexual penetration by a foreign object.

The eight men and four women on the panel acquitted him of one charge of sexual battery by restraint involving another woman. They did not reach a verdict on charges relating to the alleged assaults of two other women, one of whom was identified by her lawyers as Jennifer Siebel Newsom, the wife of California Governor Gavin Newsom.

If the jury had found that either circumstance applied, Weinstein would have faced an enhanced maximum term of 24 years when he is sentenced next year.

These recent developments mean Weinstein, who was convicted of rape and sexual assault charges a day earlier, will face up to 18 years in prison.

Weinstein is currently serving a 23-year prison sentence after being convicted of rape and sexual assault in New York in 2020. He is appealing that sentence, and has stated that he would appeal this new rape conviction.

Judge Lench will hold a hearing on 9 January 2023 to determine the next steps in the case.