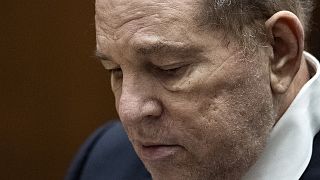 Jurors in Los Angeles on Monday found Harvey Weinstein guilty of the rape and sexual assault of just one of the four accusers he was charged with abusing.

But the three guilty counts involving an Italian actor and model known at the trial as Jane Doe 1 still struck a major blow against the disgraced movie mogul and provided another #MeToo moment of reckoning -- five years after his actions became a watershed case for the movement.

Weinstein, 70, who is two years into a 23-year sentence for a rape and sexual assault conviction in New York that is under appeal, could get up to 24 years in prison in California when he's sentenced.

He was found guilty of rape, forced oral copulation and another sexual misconduct count involving the woman who said he appeared uninvited at her hotel room door during a Los Angeles film festival in 2013.

"Harvey Weinstein forever destroyed a part of me that night in 2013 and I will never get that back. The criminal trial was brutal and Weinstein's lawyers put me through hell on the witness stand, but I knew I had to see this through to the end, and I did," the woman said in a statement after the verdict.

"I hope Weinstein never sees the outside of a prison cell during his lifetime."

Weinstein was acquitted of a sexual battery allegation made by a massage therapist who treated him at a hotel in 2010.

The jury was unable to reach a decision on counts involving two accusers, notably rape and sexual assault charges involving Jennifer Siebel Newsom, a documentary filmmaker and the wife of California Governor Gavin Newsom. A mistrial was declared on those counts.

Weinstein looked down at the table and appeared to put his face in his hands when the initial guilty counts were read. He looked forward as the rest of the verdict was read.

"Harvey is obviously disappointed in the verdict. He knows what happened and what never did," Weinstein's spokesperson Juda Engelmayer said in an email, saying there was a strong basis for an appeal on the convictions.

"Harvey is grateful for the jury's work on the other counts, and he's determined to continue his legal challenges in ultimately proving his innocence."

Los Angeles County District Attorney George Gascón applauded the accusers for their bravery in testifying in the case, saying in a statement he was disappointed by the split verdict but hoped it brings "some measure of justice to the victims".

"Harvey Weinstein will never be able to rape another woman. He will spend the rest of his life behind bars where he belongs," Siebel Newsom said in a statement.

"Throughout the trial, Weinstein's lawyers used sexism, misogyny, and bullying tactics to intimidate, demean, and ridicule us survivors. The trial was a stark reminder that we as a society have work to do."

Siebel Newsom's intense and dramatic testimony, in which she described being raped by Weinstein in a hotel room in 2005, brought the trial its most dramatic moments. But only eight of the 12 jurors agreed to find Weinstein guilty of those counts.

Jurors were deadlocked 10-2 on a sexual battery count involving Lauren Young, the only accuser who testified at both Weinstein trials.

She said she was a model aspiring to be an actor and screenwriter who was meeting with Weinstein about a script in 2013 when he trapped her in a hotel bathroom, groped her and masturbated in front of her.

Lacking any forensic evidence or eyewitness accounts of years-old allegations, the case hinged heavily on the stories and credibility of the four women at the centre of the charges.

The women's stories echoed the allegations of dozens of others who have emerged since Weinstein became a #MeToo lightning rod starting with stories in the New York Times in 2017.

A movie about that reporting, "She Said," was released during the trial, and jurors were repeatedly warned not to see it.

It was the defence that made #MeToo an issue during the trial, however, emphasising that none of the four women went to the authorities until after the movement made Weinstein a target.

Defence lawyers said two of the women — including the one he would be found guilty of rape — were entirely lying about their encounters with Weinstein.

They said the other two had "100% consensual" sexual interactions that they later reframed.

Defence attorneys said during the trial that if Siebel Newsom had not reached her later prominence, she would be "just another bimbo who slept with Harvey Weinstein to get ahead in Hollywood".

"Regret is not the same thing as rape," Weinstein's attorney Alan Jackson said in his closing argument.

He urged jurors to look past the women's emotional testimony and focus on the factual evidence.

All the women involved in the charges went by Jane Doe in court.

Prosecutors called 40 other witnesses in an attempt to give context and corroboration to those stories. Four were other women who were not part of the charges but testified that Weinstein raped or sexually assaulted them. They were brought to the stand to establish a pattern of sexual predation.

Weinstein beat four other felony charges before the trial even ended when prosecutors said a woman he was charged with raping twice and sexually assaulting twice would not appear to testify. They declined to give a reason. Judge Lisa Lench dismissed those charges.

Weinstein's latest conviction hands a victory to victims of sexual misconduct by famous men in the wake of some legal setbacks, including the dismissal of Bill Cosby's conviction last year.

The rape trial of "That '70s Show" actor Danny Masterson, held simultaneously and just down the hall from Weinstein's, ended in a mistrial. And actor Kevin Spacey won a sexual battery civil trial in New York last month.

Weinstein's New York conviction survived an initial appeal, but the case is set to be heard by the state's highest court next year.

The California conviction, also likely to be appealed, means he will not walk free even if the East Coast conviction is thrown out.