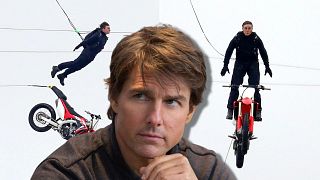 Look! Up in the sky!

Is it a plane?

In what has been described as the "biggest stunt in cinema history", new footage of Hollywood star Tom Cruise riding a motorcycle off a cliff and parachuting to safety has been released to the world.

"This is far and away the most dangerous thing we have ever attempted," Cruise says in the featurette released by Paramount Pictures.

Which is saying a lot considering he's climbed the Burj Khalifa in Ghost Protocol, hung out of a plane in Rogue Nation, and done a HALO jump in Fallout...

The behind the scene looks at the filming of the stunt also reveals that Cruise performed the stunt six times in one day.

Pretty impressive for a 60-year-old...

The highly-anticipated Mission: Impossible – Dead Reckoning Part One is set to be released in the United States on 14 July 2023.

Check out the video above for a look at Cruise's insane stunt.