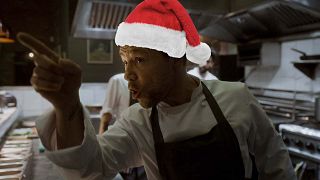 Day 18 of our Cultural Advent Calendar, in which we’re counting down our highlights of 2022 day-by-day all the way to Christmas and beyond. Our look at our favourite films of this year continues with with the fantastic Boiling Point.

I’ve always been a fan of Gordon Ramsay’s Hell's Kitchen - the show that puts a bunch of out of their depth chefs in a high intensity kitchen and gets an angry British man to shout at them.

What's not to love?

But Boiling Point, the relentless kitchen-based drama directed by Philip Barantini, takes this format to a whole new level - a much more anxiety-inducing, stressful and claustrophobic one. Think a British Uncut Gems with more pots and pans.

The BAFTA nominated film is a gripping look at one night inside a high-end London restaurant, on the busiest night of the year.

Now, I've worked in a restaurant before.

When I was about 15 years old, I got my first ever job in a fancy Italian kitchen, as a pot washer. I enjoyed it for the most part, and I would occasionally be offered a pint of beer for my hard work at the end of my shift - which made me feel very grown up. However, it was certainly a fast-paced, stressful environment.

This dynamic is something that Boiling Point captures perfectly.

The story centres on a run-down head-chef played by the little powerhouse of a man that is Stephen Graham. It’s fair to say his character has his plates piled high. Whilst trying to maintain his collapsing personal life, he must also deal with finicky food inspectors, destable customers (table 7 in particularly, I despise you!), old rivals and certain allergy requirements…

No performance this year is more worthy of a big chef's kiss than Stephen Graham's. I truly believe he is one of the best actors of our time. The rest of the cast, including Vinette Robinson, Jason Flemyng, Ray Panthaki and Alice Feetham, are also exceptionally convincing in their roles.

Arguably the most impressive aspect of this film is that it’s shot entirely in one take - without the sneaky tricks and digital transitions we’ve become accustomed to seeing in films like 1917 and Birdman - so the chaos unfolds in real time over the space of 92 minutes.

This remarkable filmmaking feat, paired with some unforgettable performances and an engaging story, makes for a truly unique and immersive experience.

Compliments to the chef!