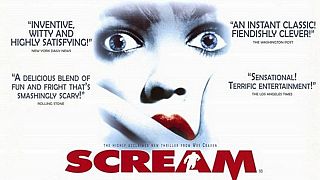 Five days before Christmas 1996, director Wes Craven did nothing short of revitalize horror by lovingly dissecting the very genre it changed forever.

Through a mix of wit, scares, comedy and a then-unique self-aware satire regarding overplayed tropes, Scream transformed ’90s horror and paved the way for generations of smart, genre-savvy filmmaking to come.

It all started with that opening scene and the one now-immortal line uttered by Ghostface: “Do you like scary movies?”

From the vantage point of 2022, this doesn’t seem all that unique. But Scream shook up horror movies with a use of self-awareness which created a distinctive relationship between the film and its audience.

This year also marks the 25 years of Scream 2, a rare sequel that actually holds up and equals the first instalment. The less said about Scream 3, the better – even if Scream 4 and this year’s serviceable 5th instalment, the infuriatingly titled Scream, were solid entries into the canon.

We'll have to wait until next March for the next instalment, Scream VI, to see if the first two films can be equalled...

1957: Elvis Presley received his draft notice to join the US Army for two years.

Many fans flooded army office with letters requesting that the singer be spared, but Elvis had no intention of backing out. Presley served for 18 months in Company D, 32nd Tank Battalion in Friedberg, Germany and worked his way up to sergeant. His army serial number was 53 310 761.

The death of "a giant of American letters."

1968: The American novelist John Steinbeck died on this day. He was 66.

The author was best known for “Of Mice And Men” (1937), the Pulitzer Prize-winning "The Grapes of Wrath" (1939), and “East of Eden”. He won the 1962 Nobel Prize in Literature for his “realistic and imaginative writings, combining as they do sympathetic humor and keen social perception."

Good luck trying to get that earworm out of your head.