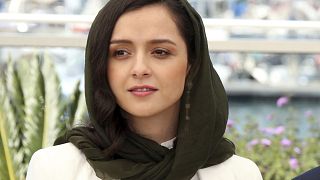 Taraneh Alidoosti during a photo call for the film "The Salesman" at the 69th international film festival, Cannes, southern France.   -   Copyright  Joel Ryan/Copyright 2017 The AP. All rights reserved.
By Euronews  with AP  •  Updated: 26/12/2022

Dozens of Hollywood and world cinema stars have joined growing calls for the immediate release from jail of Taraneh Alidoosti, one of Iran's leading actresses.

The 38-year-old was detained last Saturday after posting her support on social media for protests, denouncing the execution of protesters.

According to Iran's state media agency, IRNA, Alidoosti was arrested because she did not provide "any documents in line with her claims."

The Cannes Film Festival has also expressed its solidarity with the actress who starred in the Oscar-winning movie, The Salesman.

The Iranian actress #TaranehAlidoosti was arrested Saturday 17 December as a result of her support for the movement for freedom in her country. The @Festival_Cannes strongly condemns this arrest and demands her immediate release. #FreeTaranehAlidoostipic.twitter.com/39YHB6W1yH

Taraneh Alidoosti is best known for starring in award-winning films by director Asghar Farhadi, including "The Salesman", which won an Oscar for Best Foreign Language Film in 2017. She also starred in Saeed Roustayi's film "Leïla's brothers", presented this year at the Cannes Film Festival.

The demonstrations in Iran were triggered by the death on 16 September of Mahsa Amini, a 22-year-old Iranian Kurd who died after being taken into custody in Tehran by the morality police. Since then, hundreds of people have been killed, thousands arrested and two 23-year-old men have been hanged.

IRNA also said several other Iranian celebrities had ″been summoned by the judiciary body over publishing provocative content.″ It did not say how many or provide further details.

Hengameh Ghaziani and Katayoun Riahi, two other famous actresses in Iran, were arrested by authorities for expressing solidarity with protesters on social media. Both have been released.

At least 495 people have been killed in the demonstrations which now enter their fourth month amid a harsh security crackdown, according to Human Rights Activists in Iran. More than 18,200 people have been detained by authorities. Activists claim at least a dozen people have been sentenced to death in closed-door hearings.