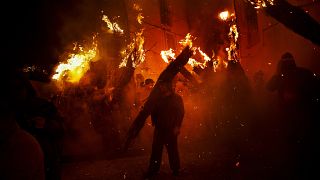 One thing is certain in life - the Spaniards love their fire festivals.

But Los Escobazos is perhaps one of their most insane ones, and it's sure to sweep you off your feet...

Every year on 7 December, the residents of Jarandilla de la Vera, a town located in the province of Cáceres, gather to set huge brooms on fire and playfully hit each other with them.

This festival is based on an old pastoral tradition, when shepherds returned from the mountain to the village to celebrate the Immaculate Conception procession, lighting up their path with blazing brooms which they would put out by beating and spiritedly hitting each other, when they got to Jarandilla.

"It started because a long time ago, the goat herders came down from the mountains to see the Virgin. The Virgin of the Conception. They came with torches with fire to see the Virgin, and that's where Los Escobazos came from," explains Mari Carmen Fernández, a local resident who was in attendance at this year's edition.

As soon as it begins to get dark, revelers light their brooms and begin to hit each other on the legs, and later they parade the Banner of the Virgin of the Immaculate Conception, which is carried by a horseman and accompanied by the attendees.

Take a look at some photographs from the festival below:

After the procession, the burning of the bonfires begins, which is an ideal moment for the families and visitors to sample some pitarra wine, which is harvested in this region of Spain.